Is It Cyberbullying? Parents’ Views Differ on How Schools Should Respond

1 in 5 parents say students who post online rumors about sex should be referred to police; far fewer feel the same for rumor of cheating on test 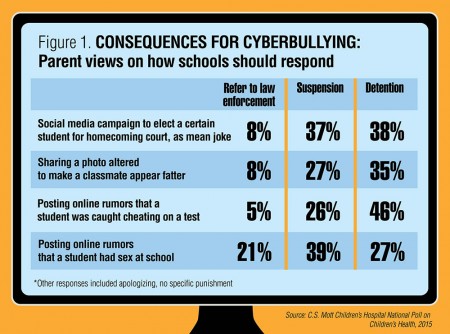 Opinions about consequences were mixed. Parents recommended the most severe punishments for posting online rumors about a student having sex in school.

(Broadcast-quality video and high resolution infographic available with this story)

Newswise — ANN ARBOR, Mich. — The digital age has given teens new platforms for cruelty: A social media prank intended to embarrass a classmate. Spreading online rumors about peers. Posting unflattering pictures of others.

But at what point does teens being mean cross over to cyberbullying, and what should the consequences be?

While many parents are concerned about cyberbullying, they are conflicted when it comes to actually defining it and determining appropriate punishments, according to today’s report from University of Michigan’s C.S. Mott Children’s Hospital National Poll on Children’s Health.

The poll included a national sample of parents of teens aged 13-17, who were asked for their views on hypothetical situations. A social media campaign to elect a student for homecoming court as a prank? Definitely cyberbullying, 63 percent say. Posting online rumors that a student had sex at school? The majority again – nearly two-thirds – say there’s no question that’s cyberbullying.

However, less than half of parents say sharing a photo altered to make a classmate appear fatter or posting online rumors that a student was caught cheating on a test was definitely cyberbullying. In nearly all cases, mothers were also more likely than fathers to label actions as cyberbullying.

“We know that parents are concerned about the harms of cyberbullying, but we wanted to learn if there was a consensus among parents about what actually constitutes cyberbullying,” says lead researcher Sarah J. Clark, M.P.H., associate director of the National Poll on Children’s Health and associate research scientist in the U-M Department of Pediatrics. “What we found is that parents differ a lot when it comes to defining cyberbullying.”

Between 30-50 percent of parents are unsure whether the four hypothetical scenarios are cyberbullying, but less than 5 percent say they definitely are not.

Opinions about consequences were also mixed. Parents recommended the most severe punishments for posting online rumors about a student having sex in school. While 21 percent of parents felt referral to law enforcement was an appropriate punishment for a sex rumor, only 5 percent say spreading rumors about academic cheating should be reported to police. “Not only are parents unsure about which actions should be considered cyberbullying. They also don’t agree on penalties,” Clark says. “Depending on the content of online rumors for example, parents recommended punishment ranging from making the student apologize to reporting the student to police.”

“Growing recognition of the dangers of bullying has prompted calls for tougher laws and school sanctions, but our poll shows the huge challenge in establishing clear definitions and punishments for cyberbullying. Schools should consider these differing opinions, to avoid criminalizing teen behavior that is hard to define and enforce consistently.”

In the annual survey of top children’s health concerns conducted by the C.S. Mott Children’s Hospital National Poll on Children’s Health, bullying ranked as the second biggest child health concern for a second year in a row, behind childhood obesity.

Data Source: This report presents findings from a nationally representative household survey conducted exclusively by GfK Custom Research, LLC (GfK) for C.S. Mott Children’s Hospital via a method used in many published studies. The survey was administered in May 2015 to a randomly selected, stratified group of parents age 18 and older with at least one child age 13-17 (n =611) from GfK’s web-enabled KnowledgePanel® that closely resembles the U.S. population. The sample was subsequently weighted to reflect population figures from the Census Bureau. The survey completion rate was 55% among panel members contacted to participate. The margin of error is ±2 to 7 percentage points.