Is your seafood climate friendly? Scientists outline the benefits of marine aquaculture 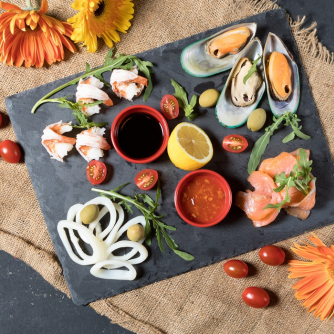 Newswise — As a major source of greenhouse-gas (GHG) emissions, food production has long occupied an important place in the climate-change discussion. Writing in BioScience, Alice Jones of the University of Adelaide, and an international team of scientists from the University and The Nature Conservancy, discuss the potential of marine aquaculture, or mariculture, to sustainably feed a growing human population.

Mariculture already constitutes 52% of the aquatic animal products people consume, say the authors, and these products may offer a way to deliver high-protein foodstuffs without the high carbon footprint of equivalent terrestrial products. "The GHG emissions per unit of protein produced by aquaculture generally compare favorably with most livestock production," say Jones and colleagues. A major contributor to mariculture's climate-friendly profile is that, unlike livestock grazing, it doesn't require substantial land-use change such as the razing of rainforest to make room for cattle.

To further improve mariculture's sustainability advantage, the authors describe ways that its emissions could be reduced. For instance, say Jones and colleagues, there are opportunities for supply chain improvements that would permit the transport of mariculture products to consumers with a considerably improved GHG footprint. Regional markets for mariculture would help, too, with the added benefit of greater food security. At the mariculture sites themselves, opportunities to improve the carbon profile abound, for instance by "cofarming bivalves with seaweed, which can lead to a net reduction in CO2 emissions, and cofarming fed finfish with seaweed or bivalves." Such measures, say the authors, would result in greater absorption of excess nutrients, reducing eutrophication and, ultimately, the degradation habitats that already store carbon.

The authors conclude with the hope that their efforts to integrate mariculture with its related environmental benefits, such as GHG abatement programs, can "support the development of climate-friendly mariculture practices that generate sustainable ecological, social, and economic outcomes."

BioScience, published monthly by Oxford Journals, is the journal of the American Institute of Biological Sciences. BioScience is a forum for integrating the life sciences that publishes commentary and peer-reviewed articles. The journal has been published since 1964. AIBS is an organization for professional scientific societies and organizations, and individuals, involved with biology. AIBS provides decision-makers with high-quality, vetted information for the advancement of biology and society. Follow BioScience on Twitter @AIBSbiology.

Oxford Journals is a division of Oxford University Press. Oxford Journals publishes well over 300 academic and research journals covering a broad range of subject areas, two-thirds of which are published in collaboration with learned societies and other international organizations. The division has been publishing journals for more than a century, and as part of the world’s oldest and largest university press, has more than 500 years of publishing expertise behind it. Follow Oxford Journals on Twitter @OxfordJournals.