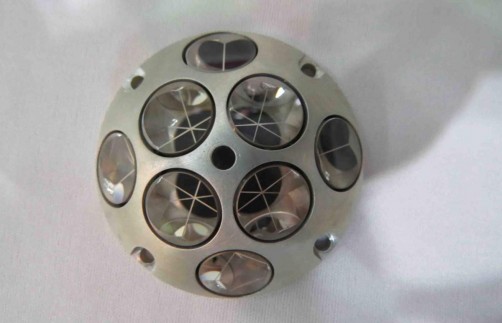 The lander will employ this retroreflector to return a laser beam to its source – a NASA Moon orbiter – and, thus, determine the lander’s precise location

Newswise — After an enterprise lasting nearly a decade, the Israeli unmanned Moon mission “Beresheet” (“Genesis” in Hebrew) will soon take off from Earth, bound for the Moon’s rocky surface. Prof. Oded Aharonson of the Weizmann Institute of Science’s Department of Earth and Planetary Sciences is head of the international science team, and will be watching closely as the craft approaches the Moon and initiates the scientific part of the mission, which will start well before touchdown.

The cost of planning and building the spacecraft was $100 million, most of it contributed by private donors, led by the president of SpaceIL, the philanthropist Morris Kahn.

If Beresheet touches down successfully, it will make Israel only the fourth country to land on the Moon, after the U.S., the former Soviet Union, and China. The craft will be launched on a SpaceX Falcon 9 rocket from Cape Canaveral, Florida; after multiple orbits around the Earth, Beresheet will arrive at its destination two months later.

Although the landing will be a historic achievement for Israel, the project is an independent initiative started by the three founders of SpaceIL, who had two main objectives in mind: to land the first Israeli space vehicle on the Moon and to inspire a new generation of students to study science and technology. The three, Yariv Bash, Kfir Damari, and Yonatan Winetraub, had entered Israel into the Google LunarX Prize competition. Although the competition officially ended in March 2018 with no winners, SpaceIL announced that it would continue working toward the goal of landing on the Moon.

Since the establishment of SpaceIL in 2011, the mission of a lunar landing has become a national project, receiving support from many quarters. Israel Aircraft Industries has been a full partner in the project from the beginning. Other supporters include government-owned companies and academia, most prominently the Weizmann Institute of Science, the Israel Space Agency, Israel’s Ministry of Science, Bezek Communications, and more. Private donors include Dr. Miri and Sheldon Adelson, Sylvan Adams, Sammy Segol, Lynn Schusterman, and Stephen Grand.

The scientific instruments aboard the spacecraft will begin measuring even before landing. Prof. Aharonson explains that “the main scientific goal will be measuring the magnetic field of the Moon. This will help us understand its source.” The Moon today has an iron core like that of the Earth, but it is small and cold. This core does not generate a global magnetic field, as ours does, but on the surface, various areas or rocks are magnetic at different levels. “If we can measure the magnetism of these rocks, we can begin to understand how and when this magnetism arose,” Prof. Aharonson adds.

According to one widely accepted theory, the Moon’s iron core was once hotter and convecting, creating a dynamo that magnetized the rocks on the Moon. The instruments on the landing craft will thus be measuring the magnetic fields in ancient volcanic rocks (similar to basalts on Earth) to see if their intensity matches that suggested by the core-dynamo theory. Among other things, such measurements might frame the time in which the dynamo was active and reveal how long ago it ceased.

Other measurements – for example, of rocks in the Moon’s craters – could uncover different sources of magnetization, possibly providing evidence that at least some of the Moon’s magnetic field is due to the bombardment of asteroids, or even from magnetic material that originated in the asteroids themselves.

Prof. Aharonson says that the instrument will first be calibrated by measuring the magnetic field of the craft itself while it is still cruising. By the time it is in orbit around the Moon, the instrument will be able to detect the lunar field. It will be the short 15 minutes in which the craft descends to the Moon that will be critical. As it approaches the surface, the readings of the magnetic field will increase; measuring this increase, as well as the changes recorded as the craft passes over different areas, will be crucial to understanding its source.

As head of the SpaceIL International Science Team, Prof. Aharonson helped select the landing site – one that will enable communication and ensure the safety of the mission, allowing the craft to land smoothly and in a suitable area for performing the scientific experiments.

The Beresheet craft will also carry a unique array of mirrors, provided by NASA, that can reflect a laser beam precisely back in the direction of its source. The source, in this case, will be a NASA Lunar Reconnaissance Orbiter, and it will enable the team to locate the position of Beresheet on the Moon’s surface.

Prof. Oded Aharonson’s research is supported by the Helen Kimmel Center for Planetary Science, which he heads; the Minerva Center for Life Under Extreme Planetary Conditions; the Zuckerman STEM Leadership Program; and the Adolf and Mary Mil Foundation.