Americium(III) is selectively and efficiently separated from europium(III) by an extractant in an ionic liquid. 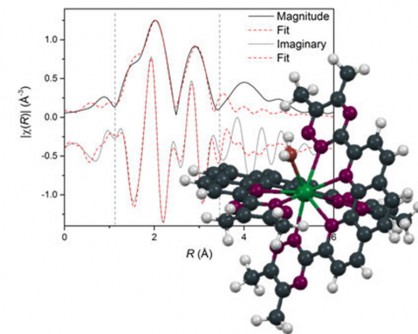 A new synergistic extraction system composed of a preorganized organic ligand, 2,9-bis(triazine)-1,10-phenanthroline, dissolved in an ionic liquid efficiently and selectively separated americium(III) from europium(III). The team determined the structure of the extracted complex, right, through application of computational modeling and validated by X-ray absorption spectroscopy.

Fuel rods power nuclear reactors. After the rods are used, scientists would like to process them to recover useful materials and reduce the amount of waste. In particular, they want to remove americium and other elements, called trivalent actinides. The problem? The desirable materials are nearly identical to other products, called lanthanides. The actinides and lanthanides are about the same size and have similar chemical properties. The team created a novel extraction system that substantially enhances selectivity and extraction efficiency, removing 99 percent of the americium while leaving the lanthanides. This is a 41-fold improvement over the current state-of-the-art system.

The ability to separate fission products from spent nuclear fuel is essential to various recycle and disposal options for nuclear power generation. By removing specific elements, such as trivalent actinides, less waste is produced, smaller treatment facilities are needed, and the cost of power production drops. Moreover, removing and recycling the long-lived actinides would reduce the radioactivity of used fuel and the length of time it must be stored. It would reduce that time by tens of thousands of years. Further, this separation option could offer a stream of rare earth elements, which are in high demand for computers and other electronics. It could also ensure the long-term availability of a low-carbon power source that, unlike solar or wind power, is not influenced by the weather.

Rationally designed metal-binding ligands, such as bis-triazine phenanthrolines, have shown great promise for separating actinides over other fission products due to a highly preorganized structure and strong covalent interactions. However, their limited solubility remains a technological bottleneck preventing their implementation. Ionic liquids, organic salts that are liquid at room temperature, possess both highly charged and non-polar regions imparting the unique ability to dissolve molecules that are otherwise insoluble. Their high vapor pressure and low flammability also make them inherently safer than traditional organic solvents. In this work, scientists dissolved a bis-triazine phenanthroline ligand in an ionic liquid that was then used for the selective removal of americium (an actinide) from europium (a lanthanide). Greater than 99 percent of the americium was recovered, achieving a 41-fold improvement in performance over the current state-of-the-art system employing traditional solvents. Characterization of the extracted complex was performed through computational investigations and X-ray absorption fine structure spectroscopy. The characterization revealed a coordinating nitrate was replaced with water in the ionic liquid system, contrary to what is observed when the phenanthroline ligand is dissolved in other organic solvents. In addition to readily dissolving the metal-binding ligand, the ionic liquid is proposed to better stabilize a charged metal-ligand complex, enabling optimal orientation of the phenanthroline ligands and stronger binding of americium. Thus, the implementation of ionic liquids as solvents provides a general approach for maximizing separation selectivity and efficiency of promising metal-binding ligands.