It Takes Two to Court

25-Jul-2014 8:00 AM EDT, by Stowers Institute for Medical Research
favorite_border 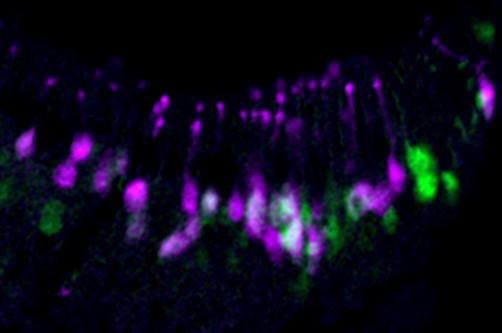 Newswise — KANSAS CITY, MO—Researchers at the Stowers Institute for Medical Research have identified the functions of two classes of pheromone receptors, and found pheromones crucial to triggering the mating process in mice.

They found one class of receptors helps a male mouse detect pheromones that indicate when a female is present. The other class of receptors lets him know if the female mouse is ovulating and ready to mate. Both sets of pheromones are critical to trigger mating. Stowers’ researchers believe mice developed this system through evolution to maximize the chance of their reproductive success.

“Interestingly, the pheromone that tells other mice that ‘I am female,’ or the one that tells others, ‘I am ovulating,’ do not do much on their own,” says Stowers Investigator Ron Yu, Ph.D., who led the study. “But when the two are presented together, the male mice showed great interest in courting and mating with the female.”

The findings, published in the July 29 issue of eLife, offer new insight into how the mammalian brain processes sensory information like pheromones to elicit courtship behaviors. Because the brain works similarly in mice and humans, the findings could also increase understanding of inborn behaviors in humans—behaviors like seeing, smelling and sexual arousal, that, “come naturally,” and don’t have to be learned.

Pheromones, chemical signals that stimulate social responses in others of the same species, trigger many of these inborn behaviors. These chemical signals can let an animal know when a suitable mate is near and activate the release of hormones that encourage the animal to mate. In mammals, the vomeronasal organ, located between the roof of the mouth and the nose, detects pheromones. Humans no longer have a functional vomeronasal system, but the mechanisms that control our inborn behavior are similar to those in other mammals. For example, looking at an attractive member of the opposite sex can stimulate hormonal changes in humans that lead to sexual arousal. Studying the vomeronasal system in the mouse provides information on how the brain links such sensory input with endocrine changes and behaviors, Yu says. The mouse vomeronasal organ contains more than 300 different receptors, but only a few of them have been matched with the pheromones they detect. Pheromone-receptor pairs have been hard to identify because the body releases pheromones in only small quantities.“In the past decade or so, studies in insects have identified pheromones, their receptors and even some neural pathways that control courtship,” Yu says. “But in mammals we have known very little. Part of the reason is that we know next to nothing about what the mammalian pheromones are and which receptors recognize them.”

In an attempt to find more pairs of pheromone receptors, Yu and his colleagues took tissue samples from the vomeronasal organ in mice, and then looked for cells that responded to the urine of female mice. With help from Stowers’ state-of-the-art Lab Animal Services Facility and using resources from the Institute’s Molecular Biology, Microscopy and Proteomics centers, the research team developed a novel approach using calcium imaging to analyze the cells and isolate the pheromone receptors.

“Since each vomeronasal neuron only expresses a single type of receptor, we were able to isolate the cells and figure out which receptors they express,” Yu says. “With this approach we bypassed the need of knowing the pheromones to figure out the function of the receptors. We then used the receptors to figure out which urine fraction contains the active pheromones. So technically, we solved a problem that had frustrated the field for some time.”

The researchers identified two previously unknown pheromone-receptor pairs. Their findings suggest two ways the brain processes sensory information to trigger mating, and opens the door for the discovery of the neural pathways that activate inborn behavior in mammals. Yu and his colleagues plan to build on their research to identify other pheromones and receptors, and map out the neural circuitry that transmits information from the vomeronasal organ to the brain.

“These next steps will help us understand how mammalian brains integrate multiple pieces of information to make critical decisions in their lives,” says Sachiko Haga-Yamanaka, Ph.D., the study’s lead author.

In addition to Yu and Haga-Yamanaka, other contributors to the study include Limei Ma, Ph.D., Jie He, Ph.D., and Qiang Qiu, Ph.D. with the Stowers Institute for Medical Research and Luke D. Lavis, Ph.D. and Loren L. Looger, Ph.D. with the Howard Hughes Medical Institute Janelia Farm Research Campus.

The Stowers Institute for Medical Research, Howard Hughes Medical Institute, Japan Society for the Promotion of Science (JSPS), and National Institute on Deafness and Other Communication Disorders of the National Institutes of Health (Award Number R01DC008003) funded the research. The content is solely the responsibility of the authors and does not necessarily represent the official views of the NIH.