Newswise — The Division III football rivalry between Ithaca College and SUNY Cortland will reach new heights in 2019, when the annual Cortaca Jug game moves to MetLife Stadium — home to the NFL’s New York Giants and New York Jets. Once referred to by Sports Illustrated as “the biggest little game in the nation,” the contest will take place at the invitation of the New York City Chapter of the National Football Foundation (NFF).

Next year will mark the 61st time that the two schools — located just 21 miles apart from each other in Upstate New York — have squared off for the Cortaca Jug. Ithaca College is serving as host for the 2019 game, which will take place on Saturday, Nov. 16, with a 1 p.m. kickoff time.

“As college football celebrates 150 years throughout next season, we are honored to work with the National Football Foundation in supporting this effort by having this incredible rivalry be a featured game,” said Susan Bassett, associate vice president and director of intercollegiate athletics and recreational sports at Ithaca College. “We intend to make this a college-wide celebration and demonstration of excellence, as we engage both the current campus community and our alumni — some 17,000 of whom live in the Greater New York City area. It is our collective goal to break the current record of 37,355 fans in attendance at a Division III football game.”

MetLife Stadium is located in East Rutherford, New Jersey, just eight miles outside of New York City. Since opening in 2010, the stadium has hosted such major events as Super Bowl XLVIII, the 2016 Copa América Centenario Final, Wrestlemania 29 and concerts by Bruce Springsteen, Beyoncé and Jay Z, and U2.

Founded in 1947, the National Football Foundation is a nonprofit educational organization that runs programs designed to use the power of amateur football in developing scholarship, citizenship and athletic achievement in young people. College Football 150th Anniversary is a nonprofit corporation formed to plan and administer a national celebration of 150 seasons of collegiate football in 2019. The commemoration will showcase the rich history and traditions of the sport and its contribution to American society and culture, while also promoting the opportunity it continues to provide to thousands of student-athletes across all levels.

Hudak was a team captain and anchored the offensive line for Ithaca's 1988 NCAA Division III championship team, earned four All-American honors during his career and is a member of the Ithaca College Athletic Hall of Fame. He has held numerous roles with the NFF and is a past president of the Ithaca College Alumni Association Board of Directors.

“Bringing ‘the biggest little game in the nation’ to the metropolitan New York City area is going to give these two schools an opportunity to put their rivalry on the biggest of stages and share their great tradition with the rest of the country,” said Hudak. “Our organization exists to support the game of amateur football and recognize those who exemplify athletic excellence, academic performance and good citizenship. Given this, inviting the Ithaca College Bombers and SUNY Cortland Red Dragons to play the 2019 Cortaca Jug game in MetLife Stadium seemed like a perfect way to celebrate the sesquicentennial of college football.”

“This is an incredibly exciting moment in a storied rivalry already full of amazing memories,” said Mike Urtz, SUNY Cortland director of athletics. “The Cortaca Jug game is the best that small-college football has to offer and is deserving of a first-class venue such as MetLife Stadium. We are looking forward to watching Cortland’s great alumni and fans, along with Ithaca’s, set a new Division III attendance record.”

While Ithaca and Cortland began playing each other in 1930, the Cortaca Jug rivalry originated in 1959. Friends and respective team captains Tom Decker of Cortland and Dick Carmean of Ithaca picked up a jug at a yard sale to serve as the prize for the winner of the annual game. Each year’s result is painted on the Jug — the original one ran out of room for scores in the mid-1980s, and the teams are now on their third Jug.

The games have alternated each year between the schools, with the 2018 edition scheduled to take place on Saturday, Nov. 10, in Cortland. Ithaca leads the overall series 40–33–3 and the Cortaca Jug series 35–24. The Bombers won the 2017 game 48-20, while the Red Dragons had previously won seven straight games in the series. 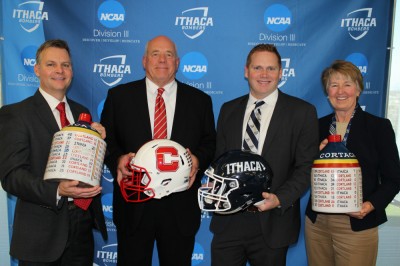 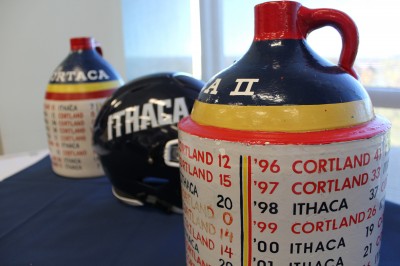 Caption: The winner of Cortaca takes home the Cortaca Jug. 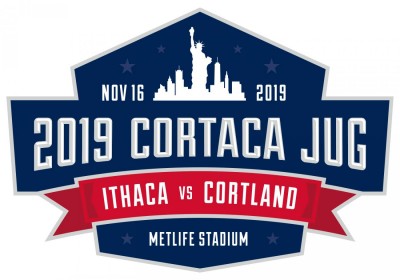