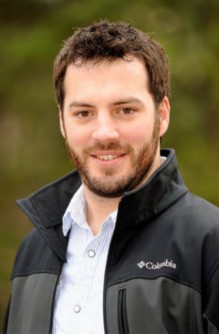 To understand the statistical perspective of that variability, Morris is collaborating withCasey Jelsema, an assistant professor of statistics at WVU whose own research primarily focuses on developing new statistical methodology.

“Morris’s research is immediately relatable to firearm examiners working right now, collecting and accessing evidence,” Jelsema said. “The verdicts of court cases could hinge on research put out by Morris and his students.”

“It is a great opportunity to do this kind of research at WVU,” Morris said. “It really helps to set us apart from any other university. Funding like this allows our graduate students to be at the forefront of forensic research.”

When trying to assess if an accused committed the crime, it is important for the forensic scientist to find the similarity and dissimilarity of features between the evidence and a control. For example, when analyzing the DNA found at a crime scene, it is compared to a control or the DNA of the suspect. Assessing the random match probability indicates the strength of the evidence. Morris’ research focuses on discovering ways to assess evidence strength using probability.

Morris also examines the interpretation of the evidence, which means understanding how the jury and public interpret what is presented in court. He also has to consider that different states, counties and cities have different laws and interpretations, so he and other forensic science investigators must present their findings in a way that various constituents can understand.

“We try to perform research that is useful in society today,” Morris said. “We want free and fair trials, and we don’t want people to be convicted of a crime if they did not commit that crime.”

Before coming to WVU in 2004, Morris worked for a police forensic lab for 13 years. He believes forensic scientists are not working toward a certain outcome in a case, but are instead looking for the truth behind the evidence.

Morris’ research is supported by the National Institute of Justice, which awarded him a grant for $387,501 in September 2017 to continue his research at WVU.

"Receiving this grant attests to (Morris’s) rigorous approach to forensic science research,” said Suzanne Bell, chair of the Department of Forensic and Investigative Science. “The collaboration with (Jelsma) creates a partnership that will have a real impact on the practice of forensic science, and we look forward to learning of the findings.”

WVU is celebrating the 20th anniversary of the forensic and investigative science program in 2018. You’re invited to join the celebration at the Department of Forensic and Investigative Science open house on Wednesday, April 25 at 4:30 p.m. at the WVU Crime Scene Training Complex. Visit forensics.wvu.edu in the coming weeks for more details.