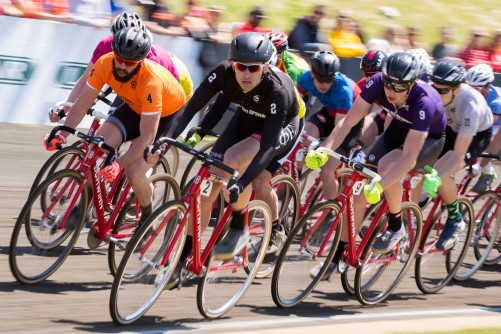 This year marks the 66th running of the men's Little 500. 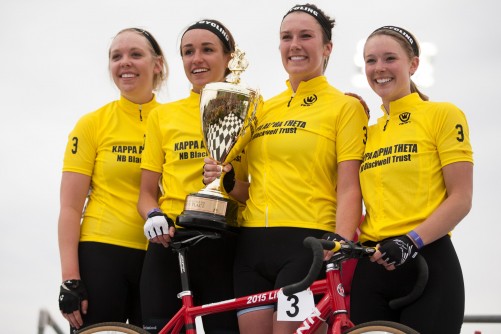 Kappa Alpha Theta looks to defend its title at the women's Little 500.

FOR IMMEDIATE RELEASEEditors: A credentials request form for media can be found online. For information, contact George Vlahakis at 812-855-0846 or [email protected]

Newswise — BLOOMINGTON, Ind. -- Hundreds of hours of preparation by members of the 65 teams competing in Indiana University's Little 500 will culminate with intense competition in the two bike races Friday and Saturday, April 15 and 16, at Bill Armstrong Stadium on the Bloomington campus.

This year marks the 29th running of the women's Little 500 and the 66th running of the men's race. Ben Higgins, an IU alumnus and star of ABC's hit reality-TV series "The Bachelor," will serve as grand marshal of both races, joined by his fiancé, Lauren Bushnell.

The women's Little 500 will begin at 4 p.m. Friday at Bill Armstrong Stadium, near the intersection of 17th Street and Fee Lane. The following day, the men's race will begin at 2 p.m.

Tickets for both races are available for $30 in advance, $40 at the gate, and $15 for children 12 and younger. They can be purchased online through IU Athletics and by visiting the IU Athletics and the IU Auditorium box offices in person. The races also can be seen live online at broadcast.iu.edu, featuring a simulcast by WIUX student radio.

The Little 500 began in 1951 as a men's race between teams from fraternities and residential units. In 1988, a women's race was added -- a year after a team of women trained but were unsuccessful in their attempt to qualify. Today, the makeup of the race is more diverse, through the involvement of more student organizations. One of the teams competing in the men's Little 500, Young Pioneers, consists entirely of international students from China.

Thirty-three teams qualified to compete in the men's Little 500 and 32 in the women's race. Teams line up for the start in 11 rows of three, just like the Indianapolis 500, after which the race is modeled. All race competitors are amateurs and are full-time undergraduate students at IU Bloomington.

As with the Indy 500, winners of the Little 500 are immortalized on their version of the Borg-Warner Trophy, which is displayed year-round at the Indiana Memorial Union.

This is the fourth year for a Little 500 crowdfunding campaign, Cycling for Scholarships. In addition to competing on the track, Little 500 teams are collecting donations from supporters through their respective Fundly sites. People also are encouraged to "play the field" by making a donation in honor of all the men and women who have and will make Little 500 a success.

On Thursday, Delta Air Lines, in conjunction with IU Student Foundation, will sponsor the first-ever "bike build" to benefit a local Bloomington nonprofit. IU student volunteers will team up with Delta employees to build approximately 50 new bikes in a range of sizes and colors at Alumni Hall, located in the Indiana Memorial Union. IU First Lady Laurie Burns McRobbie will participate. Delta’s TechOps team in Atlanta assembled nearly 700 bikes in support of the U.S. Marine Corps Reserve Toys for Tots mission last year, and members of the TechOps team will be on hand on Thursday to lend their expertise to this effort. Delta will present the bikes to their recipients in a special ceremony prior to the women's Little 500 Friday.

In addition to the excitement on the track, the IU Bloomington campus is abuzz with other athletic, entertainment and cultural activities in the days leading up to Little 500.

The 2016 Cream and Crimson spring IU football game will begin at 7 p.m. on Friday at Memorial Stadium, preceded by a no-contact youth clinic led by former Hoosier football players and coaches for children aged 5 to 12 at 5 p.m. IU's baseball and men's and women's tennis teams will also be competing this weekend.

The National Pan-Hellenic Council will present "Battle for the Throne: The Little 500 Step Show" at 7 p.m. Saturday at the IU Auditorium. The step show has become a tradition for showcasing students from diverse areas of interest throughout IU and the larger Greek community, including step teams from IU and other local NPHC chapters, in presenting an integral part of collegiate Greek culture. Teams will compete for a cash prize. Tickets are available through the IU Auditorium box office.

A free exhibit at IU's Lilly Library, "Everything is Bicycle": The Revolution of the Wheel in America," traces the ascent of the bicycle in American culture, with a focus on early development, advertisements and its prominent place in Bloomington and at IU, where cycling culture made the campus famous through the 1979 Academy Award-winning film "Breaking Away." It will be on display in the Lilly Library's Slocum Room through April. 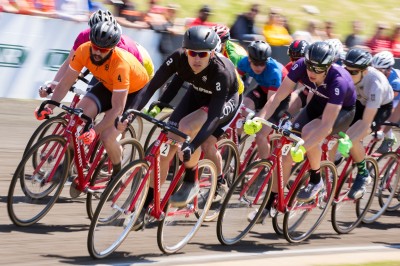 Caption: This year marks the 66th running of the men's Little 500. 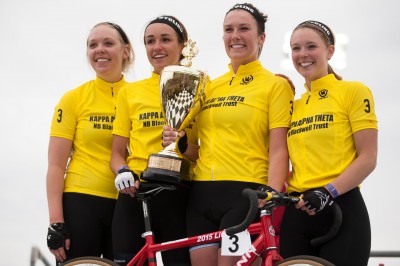 Caption: Kappa Alpha Theta looks to defend its title at the women's Little 500.