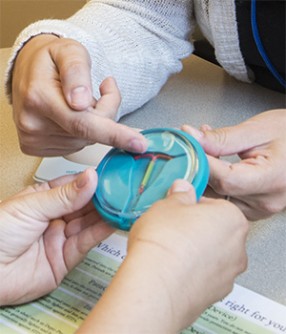 New research indicates that hormonal IUDs, pictured here, and contraceptive implants remain highly effective one year beyond their approved duration of use, according to a study at Washington University School of Medicine.

Newswise — New research indicates that hormonal intrauterine devices (IUDs) and contraceptive implants remain highly effective one year beyond their approved duration of use, according to a study at Washington University School of Medicine in St. Louis.

The preliminary findings are reported online Feb. 5 in Obstetrics & Gynecology and will appear in the journal’s March 15 print edition.

The researchers are evaluating whether such long-acting forms of birth control are effective for up to three years past their recommended length of use as approved by the Food and Drug Administration (FDA). Contraceptive implants — matchstick-sized rods inserted into the arm — are approved for three years, and hormonal IUDs are approved for five years.

“This research is important because extended use of these devices will reduce cost to both the individual and insurer and improve convenience for women, who can delay removal and re-insertion,” said first author Colleen McNicholas, DO, assistant professor of obstetrics and gynecology.

Earlier studies conducted by the World Health Organization and European researchers have shown that IUDs and implants may be effective for longer periods of time.

These long-acting contraceptive methods are garnering renewed attention in the United States because of their superior effectiveness over other forms of birth control, such as pills and condoms. The researchers evaluated the hormonal IUD Mirena and contraceptive implants Implanon and Nexplanon.

Study participants were 18 to 45 years old, and their contraceptives had to be within six months of expiring when they enrolled. The women were informed of a possible risk of pregnancy if the devices were used beyond the time periods approved by the FDA.

The researchers documented no pregnancies in the implant group and one pregnancy in the IUD group. This failure rate is similar to that of IUDs used within the recommended five-year window of time.

The researchers will continue to follow the women and others who enroll in the study. The final results will determine if contractive IUDs and implants are effective for up to three years beyond FDA-approved duration of use.

“The longer a contraceptive method is effective, the bigger the impact it can have,” said senior author Jeffrey Peipert, MD, PhD, the Robert J. Terry Professor of Obstetrics and Gynecology. “In the long term, this work has the potential to change how we provide contraceptive methods around the world and can enable women to control their reproductive health and family size.”

This project was supported by the Society of Family Planning; the Washington University Institute of Clinical and Translational Sciences National Center for Research Resources, grant UL1; the National Center for Advancing Translational Sciences, grant RR024992; the Eunice Kennedy Shriver National Institute of Child Health and Human Development of the National Institutes of Health (NIH), award T32HD055172; and an anonymous foundation.