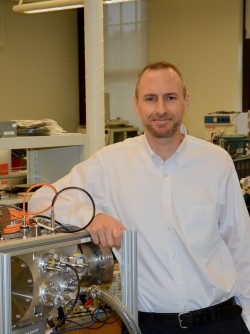 Glen Jackson, a professor of forensic and investigative science at West Virginia University, has been promoted to the rank of Fellow of the American Academy of Forensic Sciences.

The rank is one of the highest recognitions for researchers in the forensic science discipline. It was announced at the 2018 AAFS Annual Scientific Meeting in Seattle.

“In a way, it’s like being welcomed to the club. Until you get acknowledgment like this, you don’t really know how well your peers accept you in the community,” said Jackson, the Ming Hsieh Distinguished Professor of Forensic and Investigative Science. “It shows how much you are contributing to the discipline and that you have made significant contributions over time. You have to do well and keep doing well.”

The promotion to Fellow recognizes individuals actively engaged in the field of forensic science who have made significant contributions in research, teaching continuing education, professional development and other trainings and service to the forensic science community.

As a Fellow, Jackson will present new research at the 2019 AAFS Annual Scientific Meeting.

“(Jackson) continues to add to his record of distinction in forensic science,” said Suzanne Bell, chair of the Department of Forensic and Investigative Science. “The AAFS is a driving force in forensic science education, research and standards development, and being recognized as a Fellow is a significant achievement.”

WVU is celebrating the 20th anniversary of the forensic and investigative science program in 2018. You’re invited to join the celebration at the Department of Forensic and Investigative Science open house on Wednesday, April 25 at 4:30 p.m. at the  WVU Crime Scene Training Complex. Visit  forensics.wvu.edu for more details.