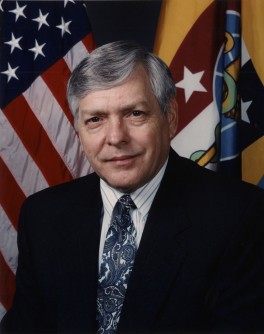 Photo courtesy of the Uniformed Services University of the Health Sciences

Dr. James A. Zimble, 4th President of the Uniformed Services University of the Health Sciences and former Navy Surgeon General

In a statement to university staff, faculty and students, current President Dr. Charles L. Rice said that Dr. Zimble “not only served USU with exceptional leadership for 13 years during his tenure as president, but he served his country in one capacity or another for 55 selfless and dedicated years. He led the university during a very challenging time in our history when the value of a military-specific medical education was often questioned, yet he remained steadfast in his support and guided us through, allowing us to thrive and continue to develop the finest military medical officers across all services.”

Dr. Zimble was born in Philadelphia on October 12, 1933. He earned his Bachelor’s degree from Franklin and Marshall College in Lancaster, Penn., before matriculating into the University of Pennsylvania’s School of Medicine, where he entered the Naval Reserve as an ensign and later received his Doctor of Medicine degree.

Dr. Zimble’s Navy career spanned 35 years of service to Sailors and Marines and their families. He completed his internship at the Naval Hospital in St. Albans, New York; trained in undersea medicine at the U.S. Navy Deep Sea Training, Submarine, and Nuclear Power Schools; then returned to St. Albans for residency training in Obstetrics and Gynecology. He served on the OB/GYN staff at the Naval Hospital at Camp Pendleton, Calif., and the Naval Hospital in Philadelphia; was chief of OB/GYN and the director of Clinical Services at the Naval Hospital in Lemoore, Calif.; was director of Clinical Services at the Naval Regional Medical Center in Long Beach, Calif.; and served as the Commanding Officer of the Naval Regional Medical Center in Orlando. In 1981, he was promoted to Rear Admiral and served as The Medical Officer of the U.S. Marine Corps. In 1983, he became the Fleet Surgeon and Medical Advisor to the Supreme Allied Command, U.S. Atlantic Fleet; and later served as the Deputy Assistant Secretary of Defense for Strategic Planning and Medical Program Management in the Office of the Assistant Secretary of Defense. In 1987, Dr. Zimble was promoted to Vice Admiral, serving as the 30th Surgeon General of the Navy.

Dr. Zimble was named President of the Uniformed Services University of the Health Sciences by the Secretary of Defense in 1991. Among his many accomplishments as President, Dr. Zimble established the University’s Graduate School of Nursing, which has since grown from its charter class of two uniformed nurses in one advanced practice nursing discipline in 1993 to more than 530 graduates in 5 program areas, and the University’s National Capital Area Medical Simulation Center, now a model for simulation education nationwide.

“Dr. Zimble leaves a giant legacy of devotion, dedication, selfless service, and a desire to always look for the best in everyone. He was a genuinely good man, superb military and academic leader, and a friend to so many of us. We will mourn his loss, yet I believe we are all very thankful that we had the opportunity to experience his warm demeanor and his superb leadership. We have lost a truly wonderful man,” said President Rice.

***The Uniformed Services University of the Health Sciences is the nation’s federal health sciences university. USU students are primarily active-duty uniformed officers in the Army, Navy, Air Force and Public Health Service who receive specialized education in tropical and infectious diseases, preventive medicine, the neurosciences (to include TBI and PTSD), disaster response and humanitarian assistance, and acute trauma care. A large percentage of the university’s more than 4,700 physician and 500 advanced practice nursing alumni are supporting operations in Iraq, Afghanistan and elsewhere, offering their leadership and expertise. The University also has graduate programs in biomedical sciences and public health, open to civilian and military applicants, committed to excellence in research which have awarded more than 375 doctoral and 800 masters degrees to date. For more information, visit www.usuhs.mil.