Perry to take on new dual role as the University of Utah's vice president for government relations and director of the Hinckley Institute of Politics. 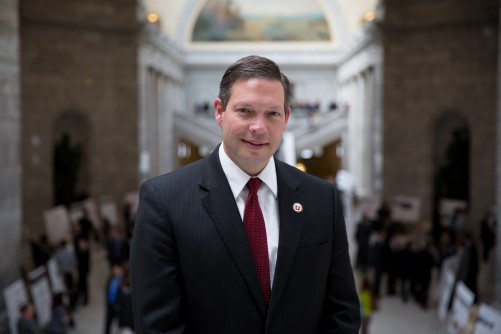 Newswise — Jan. 15, 2016–The University of Utah today named Jason Perry the new director of the Hinckley Institute of Politics.

In addition to becoming the venerable institute’s fifth director, Perry will continue to serve as the University of Utah’s vice president for government relations. University of Utah President David W. Pershing emphasized that the dual role will be a natural fit, as Perry’s work in government relations will allow him to foster new learning opportunities for Hinckley Institute students.

Perry became interim director of the Hinckley Institute in June 2015 following the departure of Kirk Jowers, who left his decade-long leadership post at the institute to pursue a career in private industry.

“Jason's extensive background in politics and his wealth of knowledge will complement the Hinckley Institute of Politics' mission to promote political and civic involvement and to engage university students in the political process,” said Pershing. “At the helm of the institute — an institution with a vast and storied history — Jason’s experience and leadership will help the Hinckley Institute build on past successes while finding new opportunities to advance programming for students and the community at-large.”

The Hinckley Institute of Politics was established in 1965 through the generous bequest of the Noble Foundation and Robert H. Hinckley. The institute observed its 50th anniversary in May 2015 and hosted a record-setting 116 political forums in the past year, including prominent figures such as broadcast journalist Ted Koppel and best-selling author Michael Lewis. The institute has received international recognition for its transformative opportunities — including a global internship program that operates in 58 nations. Hinckley Institute students rival their Ivy League peers in securing top graduate school placements and national scholarships; they are credited with helping the U to become one of the top-producers of Truman Scholars in the nation.

"The Hinckley Institute has provided opportunities for students at the University of Utah for more than 50 years. To continue this important work, the institute needs a director who can oversee its programs at the state, national and international levels and provide a vibrant forum for students on campus. Jason Perry is eminently qualified to be the director. He has my full support and I know he will be a great asset to the university and the community as well,” said Hinckley Chairman Jim Hinckley.

Perry became vice president for government relations at the U in 2011 and is also an adjunct professor at the U’s S.J. Quinney College of Law. Prior to his arrival at the U, Perry served as the chief of staff to Utah Gov. Gary R. Herbert, where he helped guide a successful transition team and a landslide victory for the governor in the November 2010 election.

"For anyone involved in Utah politics, whether as a participant, observer, scholar or student, the Hinckley Institute of Politics is the go-to institution for information, analysis and context,” said Perry. “I've always admired the work of the Hinckley Institute, and I've looked up to previous directors as leaders in such an important area of our lives. Politics matters. The activities of our elected officials and the work of government bodies impacts all Utahns, and I'm honored to be in a position to continue to ensure the next generation of citizens is engaged and informed.”

Perry has also served as executive director of the Governor’s Office of Economic Development, a cabinet-level position. Appointed in 2006 by former Utah Gov. Jon M. Huntsman, Perry oversaw the Business Development Office, the Utah Office of Tourism and the Utah Film Commission. He was instrumental in the recruitment and expansion of companies to Utah such as Amer Sports, Procter & Gamble Co., Disney Interactive Studios, Goldman Sachs Group Inc. and the Hershey Co. He also helped secure filming the series of “High School Musical” films in Utah. During Perry’s time at the helm of GOED, Utah saw national accolades recognizing the state as one of the “Most Business Friendly States,” “Most Dynamic Economy” and “Best Managed State.”