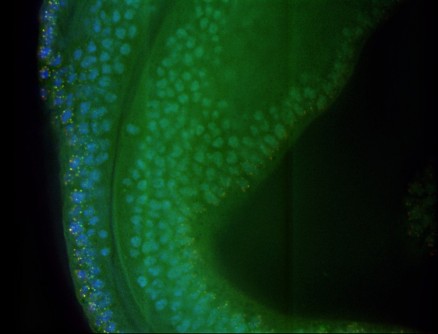 Newswise — Glencoe Software Inc., The Journal of Cell Biology, and The Rockefeller University Press are pleased to celebrate the 5th anniversary of the JCB DataViewer. First released in December of 2008, the JCB DataViewer is the world's first system forpresenting, sharing, and archiving multi-dimensional image data associated with published scientific papers. The JCB DataViewer archives data for authors and makes those data available for viewing, query, and re-use by other scientists. It has been under continuous development to support new image data formats and to provide new functionality for its users, including the hosting of extremely large images. In August of 2012, what was at the time the largest image ever posted on the internet was published in the JCB DataViewer: an electron micrograph of an entire zerbrafish embryo that contained 281 Gigapixels at a resolution of 1.6 million dpi. In 2011, the JCB DataViewer also began publishing the complete datasets from genome-wide high-content screens. This week, the JCB DataViewer publishes its eighth genome-wide phenotypic dataset, a screen in fly cells for factors that affect cell adhesion (Toret et al., 2014). With the screens published to date, the JCB DataViewer is currently the largest repository of genome-wide phenotypic data anywhere in the world.

The JCB DataViewer is powered by open source Bio-Formats and OMERO technology built by the Open Microscopy Environment (OME). It currently includes original image data (multi-dimensional image data taken directly from a microscope imaging platform) for 365 manuscripts. In total, more than 1.4 million image frames are published, and more data are published with every new issue of JCB. Liz Williams, Executive Editor of the Journal, said, "In the five years since its launch, the JCB DataViewer has garnered considerable support from the community as a first-of-its-kind venue for the publication, sharing, and archiving of original data associated with published papers. JCB's continuing commitment to data accessibility is exemplified by today's publication of the complete genome-wide screening dataset described in the paper by Toret et al (2014). As the complexity of imaging data increases, we look forward to continuing to develop and expand the JCB DataViewer as a cutting-edge data-sharing resource for the community."

Jason Swedlow, President of Glencoe Software, Inc., and co-founder of OME, said, "OME and Glencoe Software are proud to be a part of this important development in scientific publishing. We join JCB in celebrating five great years of publishing scientific image data. OME's infrastructure has many possible applications, and we are proud of our ongoing contributions to providing access to original image data in science."