Crowdsourcing rocks in search of extremophiles. 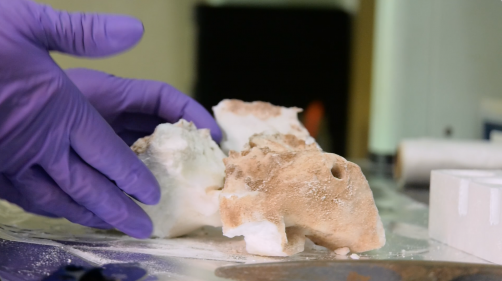 A researcher examines a rock sample in the lab of astrobiologist Jocelyn DiRuggerio.

But DiRuggerio is not looking for just any rocks. The stones she hopes citizen scientists send her lab will be alive inside with microorganisms. She wants rocks harboring tiny creatures so tough they survive in some of Earth’s toughest conditions, perhaps demonstrating that similar critters could exist in extreme conditions on moons or other planets.

DiRuggiero, an associate research professor in the Krieger School of Arts and Sciences’ Department of Biology, specializes in studying these single-cell microbes called “extremophiles.” To learn more about them she needs more samples; to gather those samples she needs help reaching the most dry, barren places on Earth: deserts, dry valleys in Antarctica, places that resemble other planets.

“We can go to some places and collect rocks, but we can’t go everywhere,” DiRuggiero said. “We try to be creative and conserve resources.”

To expand her collection range, she has launched her citizen science/crowdsourcing project, called Rockiology. (The name is a mashup of “rocks” and “biology.”) Her website features information on what sort of rocks she’s seeking, what to look for and how to send her photos of the rocks – and perhaps eventually the rocks themselves along with information on where they were found.

DiRuggiero, who likes the idea of teaching science through activity, has started cultivating what she hopes will be a small army of volunteers in the field.

She’s already got one soldier. In the southwestern desert city of Truth or Consequences, New Mexico, Darci J. Harland, a former public school science and English teacher and university professor of education, has answered the call. She says she found the Rockiology site while scouting for home-school projects for her sons, Caleb, 10, and Corban, 6.

“I've always enjoyed getting kids ‘out into the field’ to collect data, not just talking about it,” Harland said. “And what better way to do that then to collect data for an actual scientist who needs your help?”

She, her sons and some other homeschool families have taken basic lessons in rocks, “extremophiles” and DiRuggiero’s work. They’ve made a successful rock-collecting expedition near the base of Turtle Back Mountain, a few minutes out of “T or C,” as it is commonly known.

“We found some colonization and are working now to upload it all to the Rockiology website,” Harland said in an email message. “Being able to communicate with the scientist on this project has been very rewarding both for me and for the students. They were careful in their data collection knowing it was ‘for real.’”

DiRuggiero has been cracking earthly rocks while engaged in the work of “astrobiology.”  NASA defines this as the “study of the origins, evolution, distribution and future of life in the universe.”

There’s a peer-reviewed journal called Astrobiology, and scientists conducting research, but of course, as yet, no actual astrobiology off the Earth has been found. But the cosmos is too vast, DiRuggiero believes, and its perhaps 2 trillion galaxies too crowded with stars and planets for there not to be life out there somewhere.

To shed light on the mystery of whether life could exist elsewhere, DiRuggiero hopes to know more about creatures that live in conditions on Earth that resemble that on other planets. Some of those places are very dry, or very salty, or both.

The Atacama desert in Chile, for instance. With its expanses of desolate, reddish terrain cracked in some spots, littered with stones in others and broken with jagged cliffs and rock formations, the place could easily pass for Mars. DiRuggiero has conducted several rock-collecting expeditions there.

She’s found a number of Atacama sodium chloride rocks that have been “colonized,” as she likes to put it, by microbes. In the exposed innards of a cracked rock, the “colonies” give away their position in a faint green haze on the white surface. There the creatures find refuge from the more dry, sunny and windy conditions on the surface.

Microbes that can live in a salt rock might help a scientist learn something about creatures living in, say, briny water. That could be significant for astrobiologists wondering about the prospect of liquid water on Mars, which could be a sign that the place could support life. If water exists there as a liquid, it is likely to be very salty, perhaps toxic.

The hunt goes on for more information about “extremophiles,” the search party now expanded to include anyone who signs on for citizen science and Rockiology.

To arrange a video or audio interview with a Johns Hopkins expert, contact a media representative listed above or visit our studio web page. Find more Johns Hopkins stories on the Hub.