John Carpten named as the 2022 recipient of the Simon M. Shubitz Award and Lectureship 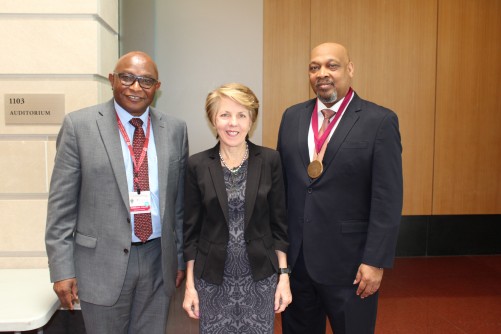 The lecture is named for Shubitz, a distinguished alumnus of the University of Chicago and a dedicated physician, humanitarian and philanthropist. He created the Cancer Prize and Lectureship in 1978 to recognize the scientific excellence of leaders in cancer research.

Carpten, an internationally recognized expert in cancer genomics and precision oncology, received the award and delivered the lecture, “Population and Tumor Heterogeneity in Cancer Genome Science,” on Oct. 10 at the University of Chicago.

“It is a tremendous honor to have been selected for the Simon M. Shubitz Prize Lecture and Award by the University of Chicago,” he said. “I am truly humbled, particularly given the scientific excellence exemplified by the list of distinguished past recipients, and I hope to live up to the standards expected among awardees.

"Giving the lecture and interacting with the University of Chicago Medicine Comprehensive Cancer Center faculty and Foundation members and friends during the award ceremony was an exceptional and impactful experience," he said.

His primary research program centers around the development and application of leading-edge genomic technologies and bioinformatics analysis in search of germ-line and somatic alterations that are associated with cancer risk and tumor characteristics.

Carpten has been an early pioneer in understanding the role of biology in disparate cancer incidence and mortality rates seen among underrepresented populations. His laboratory led the first study to interrogate somatic features of multiple myeloma tumors derived from African American patients, who have higher incidence rates and worse outcomes compared to myeloma patients of European descent.

For his many contributions to cancer research and translational genomics, he has been honored with numerous awards, including the Susan G. Komen Distinguished Lectureship on the Science of Cancer Health Disparities in 2014 and the 2018 AACR Jane Cooke Wright Lectureship.

President Joe Biden appointed him as Chair of the National Cancer Advisory Board in 2021, making Carpten the first Black person to hold this prestigious post. He was also the first Black program chair of an AACR Annual Meeting in 2019. As Chair of the AACR’s Minorities in Research Council, he led the Steering Committee that produced the inaugural AACR Cancer Disparities Progress Report in 2020.

“We are excited to bestow this honor upon such a brilliant scientist and inspiring leader,” said Kunle Odunsi, MD, PhD, director of the University of Chicago Medicine Comprehensive Cancer Center. “Not only has Dr. Carpten made pioneering contributions to our understanding of the biological basis of cancer disparities, but he is a driving force behind the nation’s important effort to end disparities in cancer outcomes and care.”

Carpten earned his PhD from the Ohio State University with a focus on human genetics in 1994. He completed a postdoctoral fellowship in cancer genetics at the National Human Genome Research Institute of the NIH in Bethesda, Maryland.

Previous recipients of the Shubitz Prize include Peter Nowell, MD, co-discoverer of the Philadelphia Chromosome; Judah Folkman, MD, a pioneer in angiogenesis; Harold E. Varmus, MD, viral oncologist and winner of a Nobel Prize for discovering retroviral oncogenes; and Mary-Claire King, PhD, a geneticist who discovered the BRCA1 and BRCA2 genes linked to inherited breast cancer.