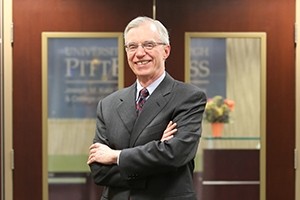 John T. Delaney will be the new dean for AU's Kogod School of Business.

Newswise — (WASHINGTON, D.C.) April 19, 2016 – A successful business school administrator and noted scholar and teacher, nationally recognized for his research on negotiation, dispute resolution, and labor-management relations, John T. Delaney will lead American University’s Kogod School of Business (KSB) as its new dean effective July 18, 2016. Delaney comes to AU from the University of Pittsburgh where he is a Professor of Business Administration, and served as the Henry E. Haller, Jr. Dean of the Joseph M. Katz Graduate School of Business and the College Business Administration, from 2006 to 2015.

During his deanship, enrollment increased by over 20%, student quality, as measured by undergraduate and graduation admissions test scores, improved, and, through systematic efforts, greater diversity was achieved. Stronger student pipelines and alumni donations resulted from expanded alumni engagement across the U.S. and abroad.

Delaney’s administrative work has generated significant financial resources. Annual fundraising increased from $1.7 million annually to an average of $6.2 million per year from FY 2013 to FY 2015, and the school’s $50 million capital campaign goal was surpassed a year ahead of schedule. As a result, the school was able to expand the faculty, renovate facilities, and provide new faculty and student support.

Since 2011, the Katz MBA program rose 37 points in the U.S. News & World Report index. The Poets & Quants website named Katz the “most improved” MBA, the Economist magazine ranked the MBA #1 in the U.S. for return on investment, and the Financial Times listed the MBA as #1 for salary gain.

“Dean Designate Delaney clearly understands the changing environment faced by business schools and the special opportunities that exist for urban schools willing to differentiate themselves. I am confident that John Delaney will take Kogod to the next level,” said Scott A Bass, Provost of American University in a memo to the AU community.

“His success at stimulating curricular innovations and enhancing student satisfaction at Iowa, Michigan State, and Pitt gives him a strong understanding of the nature and focus of a business school seeking to balance research and practice.”

Delaney is a noted scholar and teacher, authoring or co-authoring six books and reports along with almost 75 articles, many in peer reviewed journals. He has given expert testimony to the National Labor Relations Board and the U.S. Senate Committee on Labor and Human Resources Subcommittee on Labor. Sought out by the media, he has lent his expertise to The Wall Street Journal, Los Angeles Times, New York Times, Washington Post, CNN, CBS News, The Financial Times, and National Public Radio and wrote a monthly blog on the Huffington Post.

Delaney succeeds Interim Dean Erran Carmel. “Erran’s leadership over the past two years has extended KSB’s reach and enhanced its position, allowing AU to attract an outstanding pool of candidates interested in serving as the next dean,” said Provost Bass.

Delaney holds A.M. and Ph.D. degrees from the University of Illinois and a B.S. from LeMoyne College. Before joining Pitt, he held faculty positions at the Columbia University Graduate School of Business, University of Iowa, and Michigan State University. At Iowa, he also served as Director of the Industrial Relations Center, University Ombudsperson, and Chairperson of the Department of Marketing. At Michigan State, he served as associate dean for MBA Programs.