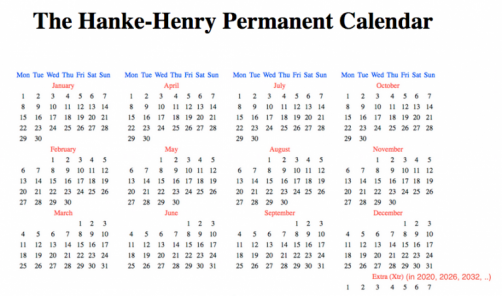 An economist and an astrophysicist have designed a new, simpler calendar, where the days would align in precisely the same way every year and a person could buy one calendar and use it forever.

Newswise — This year, 2020, is leap year. And if two Johns Hopkins University professors had their way it would be the last.

An economist and an astrophysicist have designed a new, simpler calendar, where the days would align in precisely the same way every year and a person could buy one calendar and use it forever. Every year would begin on Monday, Jan. 1. And of course leap year would be extinct, as would the occasional extra day for February.

Steve H. Hanke, a professor of applied economics, and Richard Conn Henry, a professor of physics and astronomy, call their new calendar, the Hanke-Henry Permanent Calendar. The current calendar, the Gregorian calendar, has been in place for four centuries – ever since 1582, when Pope Gregory altered a calendar that was instituted in 46 BC by Julius Caesar.

“There are enormous economic advantages to the proposed calendar,” they say. “How much needless work do institutions, such as companies and universities, put into arranging their calendars for every coming year? From now on, they could do it once, and it is done forevermore.”

All past ideas for calendar reform have failed, but Hanke and Henry believe that’s because most of them would have ended the seven-day week, thereby violating the Fourth Commandment about keeping the Sabbath Day. Hanke and Henry call that “completely unacceptable.”

The Hanke-Henry Permanent Calendar divides each year into four three-month quarters, or 52 seven-day weeks. However, that’s 364 days total, which does not match the astronomical calendar, where it takes roughly 365.24 days for the Earth to fully orbit around the Sun. To make that coordinate, Hanke and Henry would add an extra full week to the end of the year every fifth or sixth year.

“The multiplicity of calendars can be explained by a variety of scientific, cultural, economic, and religious factors,” they say. “But, on a whole, it underscores the fact that no calendar has been able to fully address all of the issues associated with measuring and organizing the passing of time.”

If the world were to agree on the new calendar, Henry says it could become reality as soon as 2021. The transition date could be Jan. 4, 2021, meaning the day after Jan. 3 would be Monday Jan. 1.

Hanke and Henry also propose a universal time system that would do away with time zones so that everyone on the globe is working with the same 24-hour period – 14:00 in Hong Kong would be 14:00 in Topeka. There would be no more a.m. and p.m.

“The date and time will always be the same everywhere,” they say, “greatly facilitating international understanding.”