Researchers Reveal Genetic Glitch at the Root of Allergies 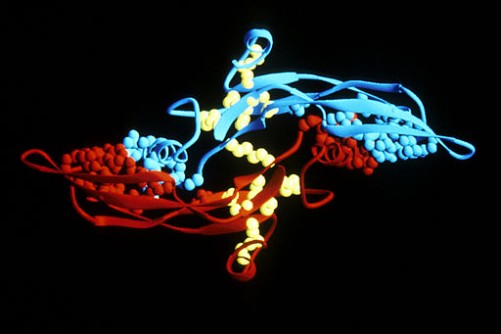 Faulty signaling by a protein called TGF-beta is well known for its roles in conditions like Marfan and Loeys-Dietz syndromes. Now, new Johns Hopknis research shows it may also be responsible for disrupting the way immune cells respond to common foods and environmental allergens, leading to a wide range of allergic disorders.

Newswise — Newly published research by investigators at the Johns Hopkins Children's Center and the Johns Hopkins Institute of Genetic Medicine reveals that a faulty genetic pathway already known for its role in some connective tissue disorders is also a potent player in many types of allergies.

Scientists have long understood that allergies are the result of a complex interplay between environment and genes, but now, in what investigators believe is a scientific first, a single genetic pathway has been implicated in an array of allergic disorders.

A report on the study's findings, published July 24 in Science Translational Medicine, shows that aberrant signaling by a protein called transforming growth factor-beta, or TGF-beta, may be responsible for disrupting the way immune cells respond to common foods and environmental allergens, leading to a wide range of allergic disorders.

TGF-beta is well known for its widespread effects in the body, from controlling how cells in various organs grow and develop to overseeing how they communicate with one another. Mutations in the genes that lead to abnormal TGF-beta signaling are also keys to Marfan and Loeys-Dietz syndromes, genetic conditions marked by blood vessel laxity and dangerous stretching of the aorta, the body's largest blood vessel.

"We have evidence that the same glitch in TGF-beta that is responsible for some of the clinical manifestations seen in Marfan and Loeys-Dietz diseases also lies behind the cascade of events that culminates in the development of conditions like asthma, food allergies and eczema," says lead investigator Pamela Frischmeyer-Guerrerio, M.D., Ph.D., an immunologist at Johns Hopkins Children's Center.

Notably, the researchers add, their experiments suggest TGF-beta is more than a mere contributor in the disease process.

"Disruption in TGF-beta signaling does not simply nudge immune cells to misbehave but appears to singlehandedly unlock the very chain reaction that eventually leads to allergic disease," says senior investigator Harry "Hal" Dietz, M.D., a cardiologist at Johns Hopkins Children's Center, professor in the McKusick-Nathans Institute of Genetic Medicine at Johns Hopkins and director of the William S. Smilow Center for Marfan Research.

The researchers' curiosity about a wider role for TGF-beta was ignited years ago when they first noticed that patients with Loeys-Dietz syndrome (LDS) had higher than normal rates of allergies.

The present study involved 58 children with LDS, ages 7 to 20, followed at Johns Hopkins. Most of them had either a history of allergic disease or active allergies, like allergic rhinitis, eczema, food allergies, asthma, and gastrointestinal and esophageal allergic disease. Not surprisingly, these patients also had abnormally high levels of several traditional markers of allergic disease, including IgE -- an antibody that drives life-threatening allergic responses -- and high numbers of eosinophils, white blood cells involved in allergic reactions.

To identify precisely how TGF-beta affects immune cell behavior, the researchers next obtained undifferentiated, or naïve, immune cells from LDS patients. Immersed in TGF-beta, these "pre-specialized" cells quickly transformed into allergy-promoting immune cells known for their ability to recognize and attack pathogens, as well as otherwise innocent substances, like food proteins.

In a final, critical discovery, the researchers found that the immune cells of children with LDS had abnormally high levels of a protein called SMAD, a known transmitter of TGF-beta signaling.

Yet, LDS patients treated with the blood-pressure medication losartan, known for its ability to tame TGF-beta signaling, had reduced levels of the protein.

That finding, the team says, not only suggests heightened -- rather than suppressed --TGF-beta signaling as the culprit behind immune cell dysregulation in patients with allergies, but also points to losartan as a promising treatment for allergies. The drug is an old, common medication already approved by the U.S. Food and Drug Administration to treat high blood pressure.

The research team is currently investigating whether losartan could halt or reverse allergic symptoms in animals.

Losartan's effects on TGF-beta were discovered by Dietz and colleagues. His group subsequently showed that losartan can halt the dangerous ballooning of the aorta caused by abnormal TGF-beta in patients with Marfan and Loeys-Dietz syndromes.

The research was funded by the National Institutes of Health under grants K23AI091869,T32 DK07632, by the North American Society for Pediatric Gastroenterology, the National Marfan Foundation and the Howard Hughes Medical Institute.

Related on the Web: