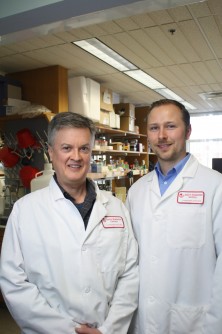 Newswise — BOSTON – December 15, 2014 – In a study published today by Nature, researchers at Joslin Diabetes Center used a microscopic worm (C. elegans) to identify a new path that could lead to drugs to slow aging and the chronic diseases that often accompany it—and might even lead to better cosmetics.

The Joslin team looked at how treatments known to boost longevity in the one-millimeter long C. elegans (including calorie restriction and treatment with the drug rapamycin) affected the expression of genes that produce collagen and other proteins that make up the extra-cellular matrix (ECM), the framework of scaffolding that supports tissues, organs and bones.

“Any longevity intervention that we looked at, whether genetic or nutritional or drugs, increased expression of collagen and other ECM genes, and enhanced ECM remodeling,” says T. Keith Blackwell, M.D., Ph.D., senior and co-corresponding author on the paper. “If you interfere with this expression, you interfere with the lifespan extension. And if you over-express some of these genes, the worm actually lives a little bit longer.”

These findings indicate that production of collagen and other ECM components plays a key role in longevity for the worm. They also suggest that agents promoting this tissue remodeling might slow aging in humans, says Dr. Blackwell.

C. elegans is an excellent model for studying aging because of its short life and easily manipulated genetics. “Essentially every other mechanism that people find in this tiny worm ends up applicable, in the most fundamental sense, to higher organisms,” he points out. “That’s a strong predictor that this mechanism is relevant to people as well.”

The main structural proteins in connective tissue, collagens make up about a third of the proteins in the human body. “Collagens are everywhere; they are like the scaffolding for our tissues, and they give us tissue elasticity and strength,” Dr. Blackwell says.

But these ECM structures deteriorate with age, and collagens have been implicated in human diseases ranging from diabetes complications to cardiovascular conditions to bone and kidney diseases.

“The aging field really has been focusing on mechanisms that protect or regenerate the cell, but what we’re saying in this paper is that it’s all tied together with the ECM,” he says.

“This is a very important discovery, which may impact many areas of diabetes development and complications,” comments George King, M.D., Joslin’s Senior Vice President and Chief Scientific Officer, who was not involved in the study. “The ECM has been a key component for many studies in diabetic complications including the retina, the heart, the kidney and wound-healing. There’s also a great deal of interest in how the ECM is involved in insulin action as well as in the survival of insulin-producing beta cells.”

The Joslin team’s research required teasing apart two molecular pathways in C. elegans, which live on a diet of rotten fruit that can create a feast-and-famine lifestyle. Both pathways involve insulin and insulin-like growth factor 1 (IGF-1), a hormone with a molecular structure very similar to insulin. One pathway allows the worm to do a version of hibernation, so that it can better endure extremes of temperatures or lack of food or other stresses, and then resume normal life in better times. The second pathway, the main focus of the study, more closely parallels human mechanisms and requires activation of a gene known as SKN-1 in the worm. SKN-1 is a master gene regulator that controls many defenses against stress and is the C. elegans counterpart of a set of human regulators called Nrf1/2/3.

“Aging is a complex process in which maintenance of tissues declines over time” says Collin Ewald, Ph.D., lead author on the paper. “The ultimate goal of aging research is to find processes that promote healthy aging by ensuring the quality of youthfulness late in life. Other laboratories examining longevity treatments in the C. elegans worm had also detected higher expression of collagen genes, but those results were not followed up and people focused on processes that act within cells instead”. Separately, studies have shown that if mice are given a treatment that makes them live longer, or are genetically predisposed to live longer, their muscle tendons are stronger and more elastic. Despite these tantalizing clues, no one had previously examined the possibility that ECM remodeling might be a defense against aging.

The Joslin discovery will help to open up new avenues of research into longevity, and potentially could lead to improved anti-aging drugs that would forestall development or progression of chronic disease.

“Additionally, it says that beauty is definitely not skin deep,” Dr. Blackwell remarks. “In fact, the richest beauty is inner beauty, because if you want to look young you don’t start with the outside, you start with the inside. Cosmetic companies might even consider becoming more like pharmaceutical companies, and looking for drugs that enhance overall health.”

Joslin’s Collin Ewald was lead author on the Nature paper and Jess Porter Abate was a contributor. Coleen Murphy of Princeton University was a co-corresponding author, and Princeton’s Jess Landis also was a co-author. Lead funding for the work came from the National Institutes of Health, and Dr. Ewald was funded by the Swiss National Science Foundation.