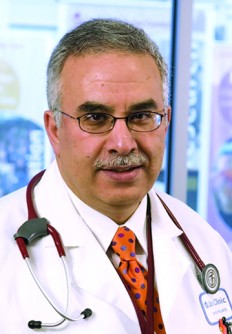 Osama Hamdy, M.D., Ph.D., is a senior physician and Medical Director of the Obesity Clinical Program at Joslin Diabetes Center. He focuses on understanding metabolic and cardiovascular benefits of lifestyle changes and weight loss. Dr. Hamdy is an Assistant Professor of Medicine at the Harvard Medical School.

Newswise — PHILADELPHIA -- June 12, 2012 -- A study by a team of clinicians and researchers at the Joslin Diabetes Center in Boston has shown for the first time that patients with diabetes who enrolled in a short-term intensive weight management program were able to lose weight and keep it off on their own for four years. The findings suggest an alternative course to bariatric surgery in the fight against type 2 diabetes.

“The notion that most people in the medical field have is that when you apply intensive lifestyle interventions, the majority of patients gain all or most of the weight back in a year,” said Osama Hamdy, M.D., Ph.D., Medical Director of the Obesity Clinical Program and Director of Inpatient Diabetes Management at Joslin and lead author of the paper.

“People have been pessimistic,” he added. “They think they may need bariatric surgery. But we are sending an optimistic message. Think again. There is something else that can work effectively in real-world clinical practice and save money too. This is a very important observation.”

The study showed that around 50 percent of the 120 patients who enrolled in the Weight Achievement and Intensive Treatment (Why WAIT) program for 12 weeks were able to maintain an average of 9.5 percent weight loss at four years, while the total group maintained 6.3 percent at four years.

Why WAIT is a multidisciplinary diabetes weight management program designed for clinical practice. The program included a change in diabetes medications to enhance weight reduction, structured dietary intervention with lower carbohydrates and higher protein and meal replacement, an exercise program, with emphasis on strength training and weekly educational and support sessions.

Although subjects in this study were followed for four years, they were on their own after the initial 12-week program. The study found that about half of the subjects did not regain the weight -- on average 24 pounds -- after four years. This group also maintained a significant improvement in their metabolic control as measured by hemoglobin A1c and the improvement in other vascular risk factors like blood pressure and lipids.

It also found that those who maintained at least seven percent of their weight loss at one year were most likely to continue the weight reduction over the long term.

“This is very important information,” Dr. Hamdy said. “It tells us not everyone gains the weight back. In reality, these are similar numbers to the weight loss gained by some bariatric surgeries at that time frame.”

Blood sugar levels in the first group dropped over the four year period, but levels in the second group rebounded after dropping initially. However, there were no differences in the groups when reductions in blood pressure, HDL cholesterol and triglyceride levels were compared at the end of the four years.

“Those who gained the weight back still got some benefits,” Dr. Hamdy said.

He said the findings of this study are more robust than the four-year results initially reported from the National Institutes of Health’s Look Ahead (Action for Health and Diabetes) study, designed to assess the long-term health consequences of intentional weight loss in overweight and obese individuals with type 2 diabetes.

He said this probably due to the fact that patients in the Why WAIT study received an optimal intensive lifestyle intervention, which included close evaluation at the outset, and that all interventions were in group format. In addition, diabetes medications were also adjusted by diabetologists at the start and during the follow-up, and patients were fed less carbohydrates and exercised more - up to 300 minutes per week, he said.

Subjects in Why WAIT were able to cut their diabetes medications by half on average at the end of the 12 week program. It saved them $561 a year on diabetes medications alone, he said. Based on other valid cost-effective analysis, patients in the program saved $2,000 per year or 27 percent on overall health care costs and around $1,000 or 44 percent on diabetes-related costs, he added.

Dr. Hamdy said the study proves that intensive lifestyle intervention is at least as effective as some common bariatric surgeries in helping people lose weight and deal with their diabetes issues, with less cost and fewer short and long-term side effects.

“Surgery carries a lot of long-term risks,” he said. “And a significant number of surgical patients gain their weight back after one or two years.”

He also said that bariatric surgery costs in the range of $20,000 while the optimal intensive lifestyle intervention through the Why WAIT model cost just $2,700. After those results, “we are ready to debate them on the long-term value,” he added.

He concluded: “So many physicians have been telling the governmental authorities that weight loss in clinical practice is a waste of money and that they will never keep the weight off. We now have a message for them. It is very effective in at least half of people in terms of weight loss and cost savings. Intensive lifestyle intervention can be a very valid option.”

Dr. Hamdy said a new study involving Joslin and Brigham and Women’s Hospital in Boston is underway that aims to compare the Why WAIT model directly to bariatric surgery.

The study was internally funded by Joslin Diabetes Center.

Joslin Diabetes Center, located in Boston, Massachusetts, is the world's largest diabetes research and clinical care organization. Joslin is dedicated to ensuring that people with diabetes live long, healthy lives and offers real hope and progress toward diabetes prevention and a cure. Joslin is an independent, nonprofit institution affiliated with Harvard Medical School.

Our mission is to prevent, treat and cure diabetes. Our vision is a world free of diabetes and its complications.