Issue dedicated to latest advances in search for a cure 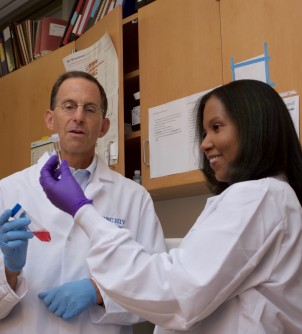 David Margolis, M.D., and Nancie Archin, Ph.D., are two of the researchers featured in the special HIV cure edition of the Journal of Infectious Diseases.

Newswise — Chapel Hill, NC – A special issue of the Journal of Infectious Diseases focuses solely on HIV eradication. Edited by a renowned HIV investigator from the University of North Carolina at Chapel Hill, the edition explains the scientific thinking behind the cure strategies being pursued at the National Institutes of Health-funded Martin Delaney Collaboratory sites around the United States.

“For this supplemental issue, we invited clinicians and scientists who represent the newly funded and restructured Martin Delaney Collaboratories to discuss developments, challenges and priorities in each of seven key areas of HIV cure research,” said David Margolis, M.D., editor of the special edition and a professor of medicine in the Division of Infectious Diseases at UNC.

Margolis is the principal investigator the Collaboratory of AIDS Researchers for Eradication (CARE), which is one of the six sites. The National Institute of Allergy and Infectious Diseases (NIAID), part of the NIH, first funded three Martin Delaney Collaboratory sites, including CARE, for a five-year period in 2011. The program was the first major funding initiative to focus on eradication of HIV from the body and was named in honor of internationally recognized HIV activist Martin Delaney.

In 2016, the NIH announced the second round of five-year grant recipients. Margolis and his CARE colleagues were among six sites funded. In the special edition, Margolis and UNC collaborator Nancie Archin, Ph.D., discuss the challenges in developing latency reversing agents (LRAs), a critical tool needed to awaken dormant virus in the body.

“Finding a cure for HIV is not a trivial endeavor. As many mechanisms control HIV latency, it might be necessary to design LRAs with activity against multiple targets,” said Archin, an assistant professor in the Division of Infectious Diseases at UNC. “Furthermore, these LRAs would need to be effective against all persistent virus, including tissue reservoirs.” UNC researcher J. Victor Garcia, Ph.D., and postdoctoral fellow Christopher Nixon, Ph.D., join colleagues from Emory University in writing an article about the two leading pre-clinical models under study in HIV cure research. Other contributors to this cure edition of JID include investigators from the University of Washington, the University of California at San Francisco, Duke University, the Wistar Institute and NIAID.