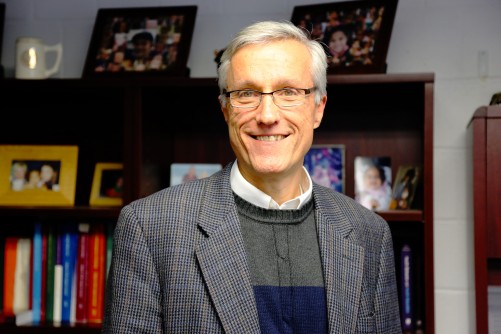 Gary Giovino, professor and chair of community health and health behavior at the University at Buffalo, co-edited a special supplement to the April issue of the journal Nicotine & Tobacco Research.

Newswise — BUFFALO, N.Y. – The percentage of African-American high school seniors who smoke has changed very little over the past two decades. In fact, the percentages in 2014 and 1992 are statistically the same.

That’s among the findings presented in a supplement to the April issue of the journal Nicotine & Tobacco Research.

“That the decline has stalled in the last 22 years is, to me, very sad news. I think it’s about the industry working really hard to keep this market,” said Gary A. Giovino, a University at Buffalo professor of community health and health behavior who served as co-editor of the supplement with Phillip Gardiner of the Tobacco Related Disease Research Program, University of California Office of the President.

Bridgette E. Garrett, associate director for health equity, and Italia V. Rolle, lead epidemiologist, from the Centers for Disease Control and Prevention’s (CDC) Office on Smoking and Health, which sponsored this special supplement, also contributed to the editorial process.

Giovino previously served as guest editor for an issue of the journal Preventive Medicine, and contributed to the Surgeon General’s 1998 report on tobacco use among racial and ethnic minority groups.

“We always knew that could be an issue, but this is the first time we’ve ever had data on it,” said Giovino, PhD, MS, who also chairs the Department of Community Health and Health Behavior in UB’s School of Public Health and Health Professions.

The major surveys that measure tobacco use are not distributed in prisons.

Papers in the supplement also address these issues:

The findings point to the need for better efforts to prevent African-Americans from taking up smoking at an older age.

“Even though African-Americans start smoking later in life, they still die disproportionately from tobacco related diseases compared to their white counterparts,” said Gardiner. “This information has been known for some time and calls upon all of us to redouble our efforts to allocate greater resources for prevention and cessation in the African-American community.”

Giovino and Gardiner co-authored a commentary in the supplement that, among other points, outlines a need for the FDA to ban menthol cigarettes, which are favored by blacks and marketed more heavily in African-American neighborhoods.

“The predatory marketing of menthol and other candy flavored tobacco products to African-Americans over the past 50 years is a tragedy,” adds Gardiner. “More than 80 percent of black smokers use these products. A major step in fighting smoking health disparities would be for the FDA to ban the use of menthol in tobacco products.”

The supplement includes a literature review on smoking cessation among African-American and white smokers authored by Jessica A. Kulak, MPH, MS, a PhD student in UB’s Department of Community Health and Health Behavior.