Journey to uncover mysteries of the Pacific Ocean

Newswise — On 14 February, nine National University of Singapore (NUS) researchers hopped onboard a vessel to start a 37-day expedition to explore an understudied area nestled in the Pacific Ocean known as the Clarion-Clipperton Zone (CCZ). Flat and deep — reaching down between 4,000 to 6,000 metres below the surface — the CCZ is often referred to as an abyssal plain.

The CCZ is characterised by polymetallic nodule fields which contain commercially valuable metals such as manganese, cobalt, nickel, copper, and rare earth elements, formed over millions of years. The expedition is part of Keppel-NUS Corporate Laboratory’s research, and it was led by Keppel Corporation’s subsidiary, Ocean Mineral Singapore (OMS) - the only Singapore company awarded an exploration contract for polymetallic nodules by the International Seabed Authority. The team aimed to conduct environmental studies and surveys for the collection of these polymetallic nodule deposits in an environmentally friendly way. This is the second such expedition involving NUS researchers to CCZ.

Polymetallic nodules contain cobalt, copper, nickel, manganese and other valuable ores which are used in electronics and green technologies, such as electric cars, wind turbines and solar panels.

Mr Aziz Merchant, Director of OMS, said, “Keppel is committed to sustainable urbanisation and we are pleased to partner NUS in conducting feasibility studies to ensure that deep-sea mineral collection can be conducted with minimal disruption to the environment.”

“The vast seafloor of the CCZ, with animals living on and in the nodules and sediment, comprises a unique deep-sea habitat that is little-known. More work needs to be done to understand the impact of nodule collection on the biological community and how we can conserve and protect it for future generations,” said NUS Tropical Marine Science Institute (TMSI) Senior Research Fellow Dr Tan Koh Siang, one of the members of the expedition team.

The abyssal floor of the CCZ may appear barren, but the team found hundreds of deep-sea species, with many possibly new to science. Living in the cold seafloor of the CCZ, many of these creatures subsist almost exclusively on food that falls from above, and are often very small, measuring less than two centimetres.

“My main interest is in a group of crustaceans known as tanaids, which are somehow very common in the CCZ. These tiny animals have a slender body and most species live in tubes that they construct using silk secreted from their legs. Because of their numbers and widespread distribution, it is an ideal candidate to be considered as an environmental indicator,” shared Mr Chim Chee Kong, TMSI Research Associate.

Box corers were used in the sampling of the seabed. After a piece of the seabed has been brought up from the sea floor, the team would take samples of the sediment to study the microbes, foraminiferans, meiofauna, macrofauna and megafauna.

“I was very excited to find tubes made by one of the attached stages - called polyps - of a jellyfish on polymetallic nodules. As these tubes were quite common, it would be interesting to observe viable polyps’ occurrence and abundance as deep-sea landscapes change over time with increased human activity. Empty tubes also provide attachment surfaces for other organisms such as foraminifera,” enthused Ms Iffah bte Iesa, Curator at the NUS Lee Kong Chian Natural History Museum.

The team discovered three species which are potentially new to science, and they include a deep-sea sponge belonging to the family Polymastiidae, some isopod crustaceans, as well as a unique type of Foraminifera — single-celled organisms with nuclei — with a skeleton made up of numerous glass-like needles woven together.

Other creatures collected include an unusually long deep-sea polychaete worm, a variety of copepod crustaceans, as well as monoplacophoran limpets.

By determining the identities and spatial distribution of new and existing species in this relatively unknown seafloor, the team hopes to further understand the biology and ecology of the CCZ. The knowledge gained will help in managing the nodule collection activities effectively without undue detriment to the ecosystem.

The immediate plan for the team is to sort, identify and count the samples they had collected. “This is an involved process as most of the organisms are less than two millimeters in size. If new species are discovered, they will need to be formally described and published,” said Dr Tan. 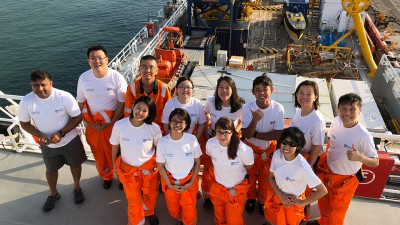 Caption: Members of the expedition team getting ready to set off on their five-week adventure 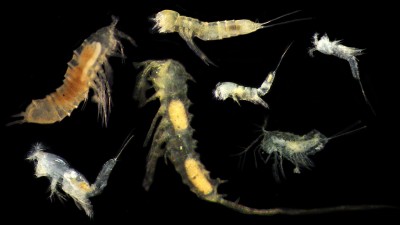 Caption: One of the team’s discoveries was a high diversity and abundance of deep-sea harpacticoid copepods that live on or in the sediment which could have an important ecological role in the CCZ