Julia Hirschberg Elected to the National Academy of Engineering

23-Feb-2017 10:05 AM EST, by Columbia University School of Engineering and Applied Science
favorite_border 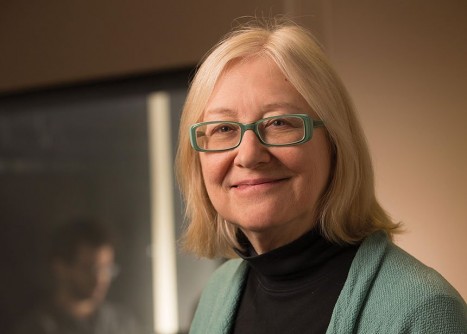 Julia Hirschberg Elected to the National Academy of Engineering

Newswise — Professor Julia Hirschberg has been elected to the National Academy of Engineering (NAE), one of the highest professional distinctions awarded to an engineer. Hirschberg was cited by the NAE for her “contributions to the use of prosody in text-to-speech and spoken dialogue systems, and to audio browsing and retrieval.” Her research in speech analysis uses machine learning to help experts identify deceptive speech, and even to assess sentiment and emotion across languages and cultures.

“I am thrilled to be elected to such an eminent group of researchers,” said Hirschberg, who is the Percy K. and Vida L.W. Hudson Professor of Computer Science and chair of the Computer Science Department, as well as a member of the Data Science Institute. “It is such a great honor.”

Hirschberg’s main area of research is computational linguistics, with a focus on prosody, or the relationship between intonation and discourse. Her current projects include research into emotional and deceptive speech, spoken dialogue systems, entrainment in dialogue, speech synthesis, text-to-speech synthesis in low-resource languages, and hedging behaviors.

“I was very pleased to learn of Julia’s election for her pioneering work at the intersection of linguistics and computer science,” Mary C. Boyce, Dean of Engineering and Morris A. and Alma Schapiro Professor, said. “She works in an area that is central to the way we communicate, understand, and analyze our world today and is uncovering new paths that make us safer and better connected. As chair of Computer Science, she has also led the department through a period of tremendous growth and exciting changes.”

Hirschberg, who joined Columbia Engineering in 2002 as a professor in the Department of Computer Science and has served as department chair since 2012, earned her PhD in computer and information science from the University of Pennsylvania. She worked at AT&T Bell Laboratories, where in the 1980s and 1990s she pioneered techniques in text analysis for prosody assignment in text-to-speech synthesis, developing corpus-based statistical models that incorporate syntactic and discourse information, models that are in general use today.

Hirschberg serves on numerous technical boards and editorial committees, including the IEEE Speech and Language Processing Technical Committee and the board of the Computing Research Association’s Committee on the Status of Women in Computing Research (CRA-W). Previously she served as editor-in-chief of Computational Linguistics and co-editor-in-chief of Speech Communication and was on the Executive Board of the Association for Computational Linguistics (ACL), the Executive Board of the North American ACL, the CRA Board of Directors, the AAAI Council, the Permanent Council of International Conference on Spoken Language Processing (ICSLP), and the board of the International Speech Communication Association (ISCA). She also is noted for her leadership in promoting diversity, both at AT&T Bell Laboratories and Columbia, and for broadening participation in computing.

Hirschberg joins Dean Boyce and many other Columbia Engineering colleagues who are NAE members; most recently elected were Professors David Yao (Industrial Engineering and Operations Research) in 2015, Gordana Vunjak-Novakovic (Biomedical Engineering) in 2012, and Mihalis Yannakakis (Computer Science) in 2011.

On February 8, the NAE announced 84 new members and 22 foreign members, bringing its total U.S. membership to 2,281 and foreign members to 249. NAE membership honors those who have made outstanding contributions to engineering research, practice, or education, including significant contributions to the engineering literature, and to the pioneering of new and developing fields of technology, making major advancements in traditional fields of engineering, or developing/implementing innovative approaches to engineering education.