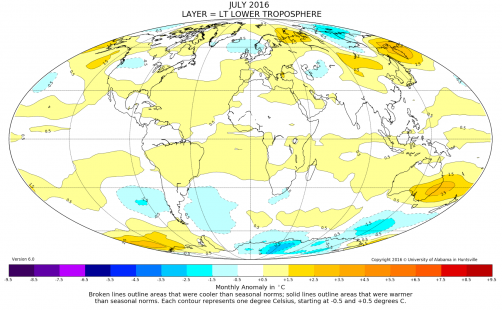 The El Niño Pacific Ocean warming event didn’t continue to fade in July, and global average temperatures — as well as averaged temperatures in both hemispheres and the tropics — rebounded slightly during the month, according to Dr. John Christy, director of the Earth System Science Center at The University of Alabama in Huntsville. “Temperatures tend to bounce around a little from month to month, even during general trends such as what we see as El Niños and La Niñas come and go. July’s warming isn’t unique. These little bumps also were seen in the cooling after other ENSOs.”

NOAA’s El Niño region sea surface temperature measurements indicate a pause in the recent El Niño’s cooling since its peak in February. Sea surface temperatures in the eastern equatorial Pacific are a little cooler than the overall average for this time of year. NOAA forecasters say the likelihood a La Niña Pacific Ocean cooling event will form between August through October has dropped to between 55 and 60 percent.

Temperature shifts in the atmosphere above the Pacific Ocean tend to lag several months behind shifts in sea surface temperatures.

In the tropics, July 2016 tied July 2015 as the warmest July in the 38-year satellite temperature record. In the tropics the past two Julys were 0.02 C warmer than the July on either side of the 1997-1998 El Niño Pacific Ocean warming event. Globally, July 2016 was the second warmest July in the satellite record, behind July 1998 at 0.51 C warmer than seasonal norms. 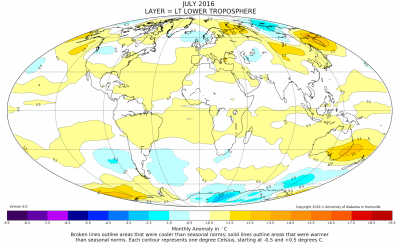