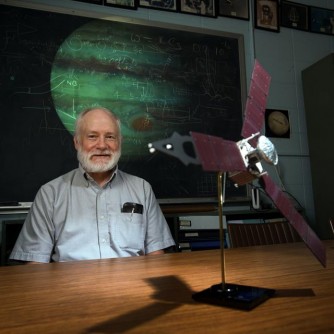 University of Iowa's William Kurth seated behind a model of the Juno spacecraft. Juno’s Plasma Waves Instrument, designed and built at the UI, will sample plasma waves to learn how Jupiter's intense auroras are produced. Kurth is lead co-investigator on Waves.

Newswise — A NASA spacecraft is about to encounter Jupiter, and the University of Iowa will be there for the rendezvous.

An instrument built at the UI is aboard the Juno spacecraft that, if all goes as planned, will make a star-spangled entry into Jupiter’s orbit on July 4. During the Juno mission, the orbiter will gather information about Jupiter’s interior, atmosphere, and magnetosphere. The long-awaited trove of data, scientists hope, will help them better understand the origin and evolution of the giant gaseous body that is by far the largest planet in the solar system, with a mass 300 times that of Earth.

William Kurth, research scientist in the Department of Physics and Astronomy at the UI, is lead co-investigator for the Waves instrument. Designed and built at the UI, Waves will sample the electric and magnetic fields of radio and plasma waves around Jupiter to determine how the planet’s auroras are produced.

Auroras, called northern or southern lights because they’re most visible in Earth’s polar regions, have dazzled humans for eons. The atmospheric fireworks at Jupiter’s poles, powered by the planet’s rotation, are the brightest in the solar system, making the Earth’s display seem puny by comparison.

"It would take 200 times the power generation capability of the U.S. to equal the power driving Jupiter's auroras," says Kurth, who will be at NASA’s Jet Propulsion Laboratory in California when the Juno spacecraft settles into Jupiter’s orbit.

Waves' primary sensor is located on the bottom of the craft, with two nine-foot-long whip antennas that stick out “like seagull wings,” Kurth says. The group of engineers and scientists that helped design and build the instrument included Donald Kirchner, Terrance Averkamp, and George Hospodarsky. Along with Kurth and Hospodarsky, physics professor Don Gurnett and postdoctoral research scholar Masafumi Imai will interpret data collected from the mission.

The Waves instrument has two sensors: The first, an electric dipole antenna, is a V-shaped device similar to the rabbit ears that once were common on TVs. It will detect the electric component of radio and plasma waves. The second sensor is a magnetic search coil, which is sensitive to only the magnetic component of plasma waves.

Waves will take measurements in Jupiter's magnetosphere as Juno darts just above the atmosphere. The planet's magnetic field is immense and intense: Its tadpole-like shape balloons 600,000 to 2 million miles toward the sun and tapers into a long tail that extends more than 600 million miles from Jupiter, reaching as far as Saturn's orbit.

“It’s a place where you don’t want to spend much time if you don’t have to,” Kurth says.

Juno lifted into space on Aug. 5, 2011. In October 2013, it executed a slingshot maneuver around the Earth, using our planet’s gravity to propel the spacecraft toward Jupiter. The mission is scheduled to end in February 2018, after traveling 2.1 billion miles.

Since 1958, the UI has designed and built instruments for 69 successfully launched spacecraft. Seventeen are currently carrying UI instruments.