5-May-2015 9:00 AM EDT, by Florida Atlantic University
favorite_border 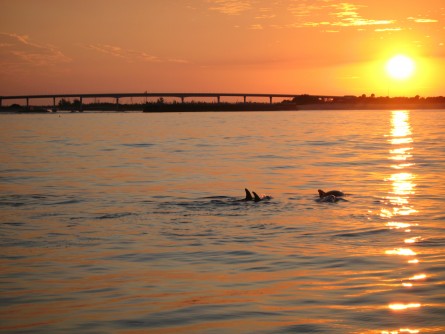 Through intensive photo-ID surveys conducted along the Indian River Lagoon, which were carried out over a six- and-a-half year period, researchers from Harbor Branch Oceanographic Institute at Florida Atlantic University were able to learn about the association patterns as well as movement behavior and habitat preferences of some 200 individual dolphins.

Newswise — They may not be on Facebook or Twitter, but dolphins do, in fact, form highly complex and dynamic networks of friends, according to a recent study by scientists at Harbor Branch Oceanographic Institute (HBOI) at Florida Atlantic University. Dolphins are known for being highly social animals, and a team of researchers at HBOI took a closer look at the interactions between bottlenose dolphins in the Indian River Lagoon (IRL) and discovered how they mingle and with whom they spend their time.

Through intensive photo-ID surveys conducted along the IRL, which were carried out over a six- and-a-half year period, the researchers were able to learn about the association patterns as well as movement behavior and habitat preferences of some 200 individual dolphins. In a paper recently published in the journal Marine Mammal Science (available online: onlinelibrary.wiley.com/doi/10.1111/mms.12222/abstract), the team found that individual dolphins exhibited both preference and avoidance behavior – so just like humans, they have dolphins they like and associate with and ones they avoid. The study also found that IRL dolphins clustered into groups of associated animals, or “communities,” that tended to occupy discrete core areas along the north-south axis of the lagoon system. “One of the more unique aspects of our study was the discovery that the physical dimensions of the habitat, the long, narrow lagoon system itself, influenced the spatial and temporal dynamics of dolphin association patterns,” said Elizabeth Murdoch Titcomb, research biologist at HBOI who worked on the study with Greg O’Corry-Crowe, Ph.D., associate research professor at HBOI; Marilyn Mazzoil, senior research associate at HBOI, and Elizabeth Hartel. “For example, communities that occupy the narrowest stretches of the Indian River Lagoon have the most compact social networks, similar to humans who live in small towns and have fewer people with whom to interact.”

In addition to providing a unique glimpse into dolphin societies, this novel study provides important insight and knowledge on how dolphins organize themselves, who they interact with and who they avoid, as well as when and where. It also gives scientists and resource managers the roadmap needed to understand how dolphin populations perceive and use their environment, and how social networks will influence information transfer and potentially breeding behavior and disease transmission. The IRL is a 156-mile long estuary located on Florida’s east coast. The lagoon is long and narrow and composed of three distinct water bodies; Mosquito Lagoon, Banana River, and the Indian River. There are five inlets and one lock (Cape Canaveral lock) connecting the IRL to the Atlantic Ocean. The estuary ranges in width from a few meters to 9 kilometers and averages in depth at approximately 1.5 meters with maximum depths at around 4 meters. In 1990, the United States Environmental Protection Agency designated the IRL as an “Estuary of National Significance” to help preserve one of the most biodiverse estuaries in North America. Researchers from HBOI have been conducting photo identification studies of IRL bottlenose dolphins since 1996, identifying more than 1,700 individual dolphins. Among the findings enabled by this data is identification of a distinct IRL stock now breeding its third generation since the study began, and insights into breeding and social behavior.

Photos and video b-roll are available at pubweb.fau.edu/media/dolphinresearch/. For more information, contact Carin Smith at 772-242-2230 or [email protected].

About Harbor Branch Oceanographic Institute: Founded in 1971, Harbor Branch Oceanographic Institute at Florida Atlantic University is a research community of marine scientists, engineers, educators and other professionals focused on Ocean Science for a Better World. The institute drives innovation in ocean engineering, at-sea operations, drug discovery and biotechnology from the oceans, coastal ecology and conservation, marine mammal research and conservation, aquaculture, ocean observing systems and marine education. For more information, visit www.fau.edu/hboi. About Florida Atlantic University: Florida Atlantic University, established in 1961, officially opened its doors in 1964 as the fifth public university in Florida. Today, the University, with an annual economic impact of $6.3 billion, serves more than 30,000 undergraduate and graduate students at sites throughout its six-county service region in southeast Florida. FAU’s world-class teaching and research faculty serves students through 10 colleges: the Dorothy F. Schmidt College of Arts and Letters, the College of Business, the College for Design and Social Inquiry, the College of Education, the College of Engineering and Computer Science, the Graduate College, the Harriet L. Wilkes Honors College, the Charles E. Schmidt College of Medicine, the Christine E. Lynn College of Nursing and the Charles E. Schmidt College of Science. FAU is ranked as a High Research Activity institution by the Carnegie Foundation for the Advancement of Teaching. The University is placing special focus on the rapid development of critical areas that form the basis of its strategic plan: Healthy aging, biotech, coastal and marine issues, neuroscience, regenerative medicine, informatics, lifespan and the environment. These areas provide opportunities for faculty and students to build upon FAU’s existing strengths in research and scholarship. For more information, visit www.fau.edu.