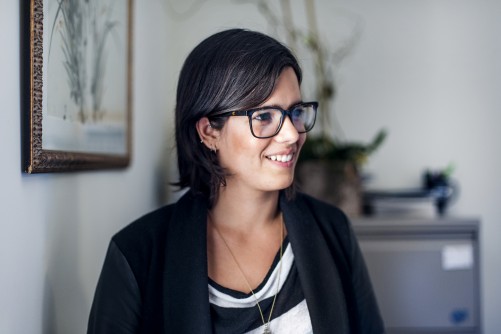 The following is by Fernanda Alonso, LL.M., LL.B.. an associate with the O'Neill Institute for National and Global Health Law at Georgetown University. Aug. 9, 2016

Newswise — Currently, we are experiencing a new phenomenon with youth consumption of e-cigarettes all around the United States. For the second consecutive year, e-cigarettes were the most popular product among youth. FDA’s newest statistics indicate that more than 3 million middle and high school students were users of e-cigarettes in 2015, representing 540,000 more consumers than in 2014. New flavors appear to be one of the main reasons why teens are getting hooked on this product. In 2013-2014, 81% of the current e-cigarette youth users, pointed to the appealing flavors of e-cigarettes as one of the main reasons of why they started using them, stating that they used e-cigarettes “because they come in flavors I like.” This is even more concerning when we see how quickly this market is growing. In a report released in January 2014, researchers found that every month, an average of 240 new flavors are added to the e-cigarette market.

Although tobacco companies claim that new flavors are simply a response to adult users’ demand for variety, flavored tobacco products primarily serve to attract new users, particularly kids, and to get them addicted. As shown by the Campaign for Tobacco Free Kids, an industry publication stated, “While different cigars target a variety of markets, all flavored tobacco products tend to appeal primarily to younger consumers.” Even the industry leader Lorillard, which sells flavored e-cigarettes such as kool-aid and gummy bears, has admitted that “kids may be particularly vulnerable to trying e-cigarettes due to an abundance of fun flavors such as cherry, vanilla, pina-colada, and berry.”

Cigarettes with specific characterizing flavors were prohibited by the FDA in 2009, with the goal of halting the tobacco industry’s strategy and reducing the number of children who start to smoke and become addicted to different tobacco products. It was no secret that before this ban, tobacco companies marketed cigarettes with flavors, images and names in order to appeal to a younger audience. The flavored cigarette ban not only occured in the US but has been a trend in various parts of the world. For instance, in 2012, Brazil became the first place to ban all tobacco flavors. Likewise, in 2014, the European Union passed theTobacco Products Directive, which took effect on May 20, 2016, prohibiting flavored cigarettes, except for menthol, where the ban is delayed till 2020.

Almost seven years have passed since the FDA’s prohibition, and the results have been favorable. In 2006, the National Youth Tobacco Survey (NYTS) indicated that 30.2% of male high school students and 21.3% of female smoked cigarettes, while the NYTS in 2013 showed that the smoking prevalence in male students had dropped to 14.1% and to 11.2% in females. The statistics appear to show that the ban on flavored cigarettes has been helpful in reducing prevalence. However, it is important to take into consideration that the ban was not the only change in tobacco regulation. In the last couple of years, there were other policies which could have also been helpful, such as taxation and the restrictions on tobacco sales, labeling, advertising and promotion.

The FDA’s ban on flavored cigarettes did not apply to e-cigarettes, which still can come in different flavors such as cotton candy, fruit punch, and chocolate. This is considered to be one of the main reasons why e-cigarette consumption has had such a huge increase. Indeed, studies regarding youth expectations about other flavored tobacco products such as bidis and hookahs, have found that young consumers prefer flavored tobacco over the regular tobacco because they consider flavored tobacco to taste better and be safer. So even though the ban on flavored cigarettes seemed to help in the reduction of youth use, the tobacco industry quickly found another product to replace it and keep targeting kids. This growing use of e-cigarettes can add to the problem by keeping overall youth tobacco use on the rise. A new study from the American Academy of Pediatrics shows that there are more young tobacco consumers than before, if we include e-cigarettes. The study published in July 2016 states that among 12th grade students in Southern California, the combined current cigarette and e-cigarette use in 2014 was 13.7%, which was greater than 2004, were cigarette use was 9% (before e-cigarettes were available).

This year, the FDA issued a final rule that includes e-cigarettes regulation, and which takes effect today (August 8). It regulates the manufacture, import, packaging, labeling, advertising, promotion, sale, and distribution of e-cigarettes. Among the restrictions to e-cigarettes are the prohibition to sell them to all of those under 18 years of age and to give away samples of e-cigarettes including their components and parts. However, the FDA did not ban the different flavors of e-cigarettes, and its spokespeople said that they would consider future regulation related to flavors based on a further study about the health risks and benefits of vaping.

Beyond the health risks and benefits of e-cigarettes, it would be important to consider the ban of all flavors given that the statistics show that a high percentage of young people who use e-cigarettes started because of their attraction to these. Even though the FDA wants further studies, the ban of flavored e-cigarettes has already been proposed by various international health authorities, such as the World Health Organization, which suggested the prohibition in its recommendations for regulating e-cigarettes.

What to consider in flavored e-cigarette banning?

In order to regulate flavored e-cigarettes, it is important to take into account that even when they are seen as a new way to introduce young people to tobacco use, e-cigarettes can also be considered less harmful than cigarettes and thus, as a new way to help older smokers quit cigarette smoking.Several authors have marked this duality and have proposed different ways to regulate them. For example, O'Neill Institute Senior Scholar Eric N. Lindblom in his article “Effectively Regulating E-Cigarettes and Their Advertising—and the First Amendment“, states that one way to stop young people’s use of e-cigarettes is by banning the flavors which attract youth, which can help discourage them from trying “e-cigs” and not affect its use as an alternative to smoking by current cigarette users.Lindblom, like others, propose the ban of flavors that appeal to youth in order to protect children’s health. Others argue against this stating that a ban on flavors limits adult choice and eliminates products that adults may prefer. Additionally, they argue that flavor options exist for different age restricted consumer products and therefore they shall be allowed in e-cigarettes as well. While it is true that adults should be allowed to decide what they want to consume, the government needs to take appropriate measures to ensure the well-being of children when their health is at stake. Similar arguments were made by the tobacco industry and other groups when the government was looking to ban cigarette flavors and yet the government went through with the prohibition of flavors in cigarettes.What is to come?

This year has been important for e-cigarette regulation with the FDA finally publishing a series of rules which can be applied to these products. It will be interesting to see the impact of the new policies on the e-cigarettes market, particularly in youth consumption. The ban of e-cigarettes for those under 18 years of age could be enough to curb the growth in consumption but that still remains to be seen. If in the years to come there is no substantial decrease, it may be necessary to start thinking on banning flavored e-cigarettes, just like it was done with cigarettes.