Kansas State University Distinguished Professor and soil microbiologist Chuck Rice gave a presentation at the World Bank on April 16. The latest assessment of global climate change is out and scientists from around the world have recommended changes including some in agriculture, forestry and other land use designed to mitigate their effects on climate change. As a lead author of a chapter in the Intergovernmental Panel on Climate Change assessment report released this month, Rice was part of a group of 18 authors from around the world who wrote the chapter pertaining to agriculture, forestry, and other land use. In an interview, he discussed some of the recommendations made by the authors. 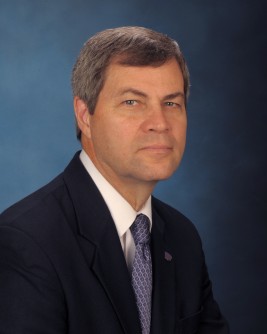 Newswise — WASHINGTON, D.C. – The latest assessment of global climate change is out and scientists from around the world have recommended changes including some in agriculture, forestry and other land use designed to mitigate their effects on climate change.

As a lead author of a chapter in the Intergovernmental Panel on Climate Change assessment report released this month, Kansas State University Distinguished Professor and soil microbiologist Chuck Rice gave a presentation at the World Bank on April 16. Rice was part of a group of 18 authors from around the world who wrote the chapter pertaining to agriculture, forestry, and other land use. In an interview, he discussed some of the recommendations made by the authors.

Most greenhouse gases come from burning fossil fuels to produce energy, although deforestation, industrial processes, and some agricultural practices also emit gases into the atmosphere, according to the Environmental Protection Agency. Greenhouse gases act like a blanket around the Earth, trapping energy in the atmosphere and causing it to warm. This is called the greenhouse effect and is natural and necessary to support life on Earth. However, a buildup of greenhouse gases can change Earth's climate.

“Agriculture globally contributes about 10 to 12 percent to greenhouse gas emissions,” Rice said. “If you add in forestry it moves it up to around 25 percent. Agriculture is significant but not the major contributor and has declined slightly, percentage-wise, since the last report in 2007, not so much because agriculture has changed that much but because the energy sector is contributing more.”

“The IPCC was started in the late 1980s when the first President Bush signed with other countries that climate change was an issue for the planet,” said Rice, who added that this latest report is one of a series that has come out every seven years. “Our chapter addresses agriculture’s role in the future of the emission of greenhouse gases.”

This is the fifth assessment report, said Rice, who also served on the fourth report which received the Nobel Peace Prize. Overall, the panel includes three working groups -- one studying the science involved in climate change, one studying the adaptation to climate change and one studying the mitigation of climate change which is the group Rice’s team is part of. About 240 scientists, including specialists in forestry, land use, social science, economics and others, contributed to the third group report’s 16 chapters.

“It’s important to remember that we’re not creating new science but rather assessing the current state of the science on how agriculture, forestry and land use contribute to and can mitigate greenhouse gas emissions,” Rice said. They conducted literature reviews and summarized key points of the science that’s occurred since the last report in 2007.

He acknowledged that the words “climate change” can be controversial among some people, but added, “As far as greenhouse gas emissions and concentrations in the atmosphere, I don’t think there’s any controversy. Those are true measurements. The science is really solid on that. What people might question is, what’s the impact of those greenhouse gases?”

“It is certainly clear by 97 percent of those climate scientists that the increases in greenhouse gases such as CO2, nitrous oxide and methane, have resulted in about a 1.5 degree Fahrenheit increase in global temperatures. That’s an important point, that it’s global,” he said. “There’s a lot of variation around the globe. In time our atmosphere goes through natural cycles and what the scientists are saying is that what we’re doing is enhancing those cycles.”

Rice said that even the cold weather in the United States this past winter might make sense in relation to climate change because the rest of the globe was warmer. Because of that, weather patterns in the Arctic Circle were affected which impacted the U.S.

Key Recommendations for Agriculture, Forestry and Other Land Use

*Soil carbon sequestration – One of the recommendations coming out of this and previous reports is that carbon be sequestered through land management changes, Rice said of practices that hold carbon in the soil. Through reduced tillage in farming – no-till being the prime example – and systems using cover crops and residue, those are major ways agriculture can reduce the emission of greenhouse gases because carbon dioxide is being taken up by the plant materials and stored in the soil.

“It turns out that (carbon sequestration) has multiple benefits. If you increase the carbon content, you improve the quality of the soil. It makes it more productive, less prone to erosion and the organic matter helps hold water so it provides some adaptation to the droughts and heat we have in Kansas,” Rice said.

Although the practice of not tilling the soil (no-till) started in the United States, two other countries, Brazil and Argentina, are the world leaders in no-till, said Rice, adding that 80 percent or more of agricultural land in Brazil and Argentina are farmed using no-till systems.

*Promoting product use with low emissions – This recommendation pertains mostly to the forestry sector, Rice said. Cement is a major emitter of carbon dioxide (CO2) greenhouse gas, so the authors suggested that wood products or others with lower emissions than cement be considered where cement has traditionally been used.

“That’s one of the unusual aspects for our sector, is that land is used for multiple things – agriculture, forestry, and ecosystem services, including water quality and wildlife. So this sector has some opportunities to help improve the quality of land resources as well as mitigating climate change.”

For U.S. farmers, he said, nitrogen makes up about 40 percent of their inputs: “That’s not true around the world but we can improve that. In livestock emissions, U.S. and Europe have made strides to make livestock production more efficient but in some other parts of the world, lower quality of animal plus poor forage quality leaves much room for improvement in livestock efficiency.”

“Methane emissions from livestock is a major contributor to agriculture’s footprint,” Rice said. “Approximately 40 percent of agriculture’s emissions are due to livestock and if we could reduce livestock that would reduce emissions. The report acknowledges that there are social and political barriers to all of these options. Certainly the consumption of meat would be a social barrier. Traditionally as countries increase their personal income, meat or protein consumption goes up.”

Because livestock production is a contributor to greenhouse gases, he said, it had to be put on the table.

*Reducing food waste - “Another thing that’s easier to accomplish is cutting back on food waste,” he said, adding that 30 to 40 percent of food that’s produced is not used.

“Agriculture’s in a unique position,” Rice said. “If you look at the mitigation options in the next 20 to 30 years, if agriculture implemented all of those mitigation practices around the world, it would come close to mitigating all of agriculture’s contributions to greenhouse gasses so it would have a net zero effect, plus a lot of these things would make agriculture more efficient.”

He said the report will be shared with policy makers who next meet in Paris in 2015. Those individuals will come up with policies for countries to implement aimed at reducing greenhouse gases.

“Kansas has always had drought, heat trends and cold events. A lot of these mitigation options are things we should be doing anyway – improving soil quality, reducing erosion – so this effort is going to help Kansas agriculture whether you agree that humans are having an effect on climate change,” Rice said. “A lot of the things we’re talking about are things that you should be doing for the environment as well as things that are profitable for the farmer, including increasing efficiency and reducing tillage.”

Video and audio interviews with Chuck Rice on this subject are available on the K-State Research and Extension news page at http://www.ksre.ksu.edu/news/.