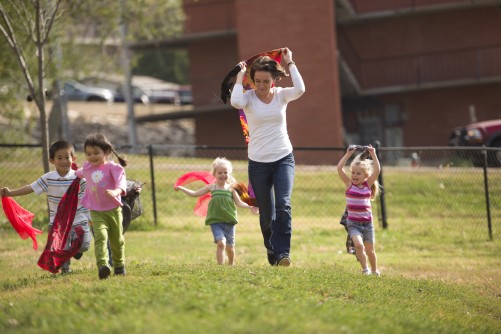 Children at Hoeflin Stone House Early Childhood Education Center on the Kansas State University Campus embrace David Dzewaltowski's advice to go out doors and play. Dzewaltowski is professor of physical activity and public health in the College of Human Ecology.

"We find that the more time children spend outdoors the more active they are," said David Dzewaltowski, professor of physical activity and public health in the Kansas State University College of Human Ecology.

He called the lack of physical activity in children today a national problem, adding, "We think children are physically active, but studies show us that most are not."

Adults, he said, may do more to limit movement that to promote movement.

"It's natural for most kids to move. That's how they learn and how they develop," he said.

Dzewaltowski directs the Youth Physical Activity and Nutrition Motivation Lab in the kinesiology department. His research focuses on environmental and psychosocial influences on childhood physical activity and on interventions to prevent childhood obesity.

Nationally, more than a third of children and adolescents were overweight or obese, according to 2012 Centers for Disease Control and Prevention statistics. Obesity can result in immediate and long-term health, social and psychological problems.

Studies show that obese children are likely to be obese adults, Dzewaltowski said. Physical activity is one answer to what has been called a national epidemic.

"We live in a toxic environment that does not promote physical activity in children, or anyone," he said. "From birth to death, it is important to be physically active. We know that physical activity improves quality of life and helps avoid chronic illness."

Dzewaltowski recommends placing young children in an environment where they will be active. His suggestions:

For outdoor play, provide small portable items such as balls and tricycles. Studies have found that this type of playground equipment promotes physical activity better than large stationary equipment such as jungle gyms and swing sets.

Clear the child's room of video games and television sets. Look at other practices at encourage sedentary behavior. Ask yourself, "Am I using television as a behavior management technique?"

Create a play environment where a child can use lots of muscle groups. Running, climbing, jumping and hopping are large physical activity motions.

Make a space indoors that allows free play if possible. Provide toys that encourage active play: balls, hula hoops, hopscotch and ping pong. "You don't want to be the parent that says no balls in the house," he said. Get a house-friendly ball.

Allow bandages. "Evidence shows that some parents are overly concerned with safety," he said. "Allow children to fall and learn to regulate their own behavior. If not allowed to fall and get scratches and bruises, how are they going to learn to play and be safe on their own?"

A new area of research is looking at natural play environments such as trees, the professor said. "We have so sanitized the play environment that we have taken some of the fun away. We have to find a balance of safe, challenging and engaging."

The scientist advises against over structuring playtime. Evidence shows that children are more active when allowed to make their own choices, instigate play and interact on their own.

Dzewaltowski sees a problem with rushing children into adult models of sports activities. He cautions parents about organized sports for 3- to 5-year-olds who should be learning fundamental motor skills.

Programs should be age appropriate. An activity and program for an 8-year-old may not work for 5-year-olds.

"There is some evidence to suggest that children should have a wide range of moving activities – not specialize in one activity or sport," he said.

The adult model of sports and exercise does not apply to children, he said. "Kids move in quick spurts, not the adult way of exercise and continuous movement."

Is there an outside play area?How much time children spend outdoors?Is there small portable toys, not just large stationary playground equipment?

Week of the Young Child, sponsored by the National Association for the Education of Young Children April 12-18, focuses on the foundation for a child's success in school and later life.

Through research, scholarship, teaching and outreach, the faculty in the College of Human Ecology continually seek ways to nurture healthy children and families. Through his community-based research and public health work, Dzewaltowski reaches families throughout the state.