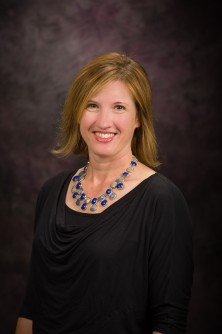 Ruth Gurgel is studying music educators across the nation who use culturally relevant teaching styles.

The study addresses a problem seen nationwide in music education: students of minority ethnicities, of lower socio-economic statuses and whose parents did not obtain secondary education drop out of K-12 music classes at higher rates.

"This tells us there is a problem in music education that needs to be addressed," said Ruth Gurgel, assistant professor in the School of Music, Theatre, and Dance, which is part of the university's College of Arts & Sciences. "Music in the schools should continue speaking to students from every background, no matter their age."

The Kansas State University research team is documenting the practices of teachers who are successful in retaining underrepresented groups in music.

To identify teachers who are using culturally relevant pedagogy, Gurgel sent a survey to about 500 teachers in school districts with mixtures of ethnicities, incomes and demographics. The survey assesses educators' conceptions of self and others, social relations and knowledge, as well as their classroom practices, including cultural competence, sociopolitical consciousness and their level of focus on musical achievement in the classroom.

The team already has identified several inspiring educators, including a high school teacher who connects students with the historical context of classical pieces and builds relationships with students outside of class.

"Even though she's been teaching for 38 years, she uses social media, and she gives students her phone number so they can call her anytime," Gurgel said. "She's totally invested in their lives, and she is learning from them."

One of the team's most surprising findings is that culturally relevant music education does not necessarily translate to teaching the students' preferred genre of music, whether it is hip-hop or pop-rock.

Gurgel said, "Teachers get confused, because they think, 'I just picked your favorite song, and half of you are not participating — what's going on?' But the student thinks, 'If you're going to make me sing with a YouTube video, I do that at home, so why should I do it with you?'"

In contrast, educators who retain proportionate levels of student diversity may use seemingly antiquated genres but include challenging elements taught in a relatable way.

Involving undergraduates in the project has been beneficial, Gurgel said.

"If I were doing this all by myself, it would be very lonely and I would be relying on my own evaluative skills," Gurgel said. "They all are invested, energetic and enthusiastic. Their passion, ideas and curiosity are my favorite parts. I designed the project, but the students make it so much richer."

Gurgel laid the foundation for the current project when she collected and analyzed K-12 students' perceptions about culturally relevant pedagogies in their classrooms. The research resulted in a book, "Taught by the Students," published in October 2015.

To continue the research, Gurgel and her students will visit culturally relevant music educators, transcribe their interviews and observations, and use tools of grounded theory to analyze, code and recode the data.

The final product of the project will be a book in which each student writes a chapter about the teacher they visited. The book is expected to be published in 2018.

"I'm sure the students on my team will be deeply impacted by the study, but I also want the research to impact the students who will come after them," Gurgel said. "I hope the book will be used not only by undergraduate students in Kansas but also that other music educators will see it as a tool they can use with their students in universities across the United States."