KATRIN cuts the mass estimate for the elusive neutrino in half 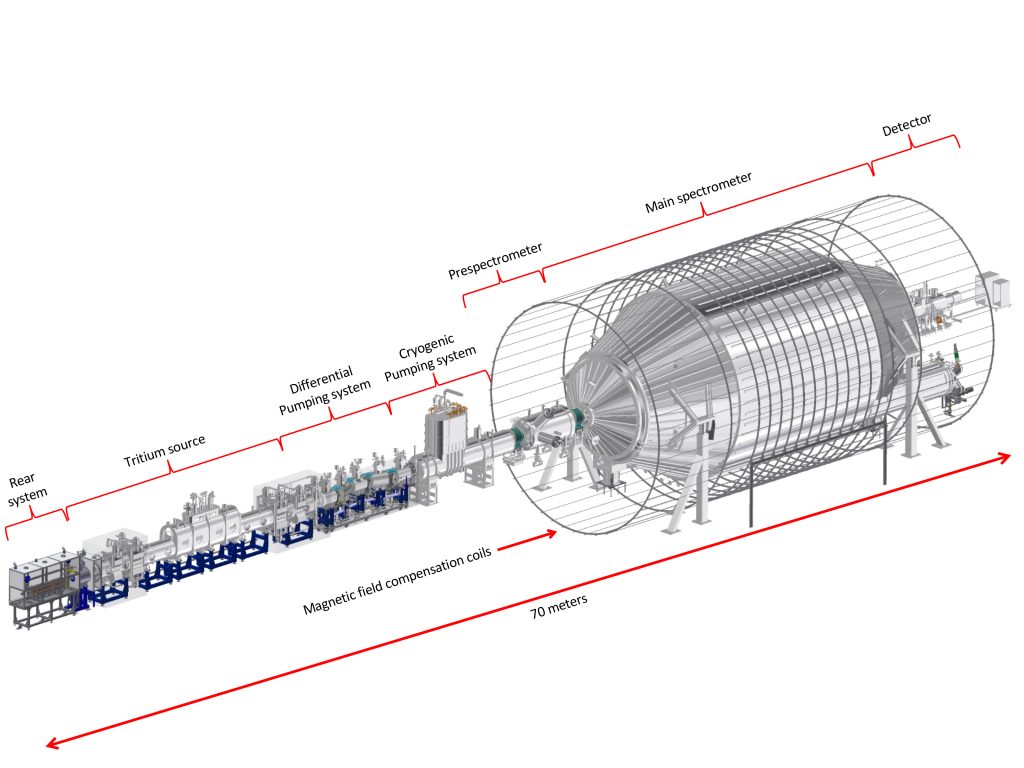 The layout and major features of the KATRIN experimental facility at the Karlsruhe Institute of Technology. 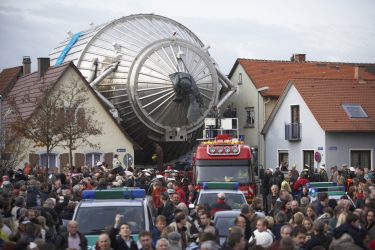 The spectrometer for the KATRIN experiment, as it works its way through the German town of Eggenstein-Leopoldshafen in 2006 on its way to the nearby Karlsruhe Institute of Technology. 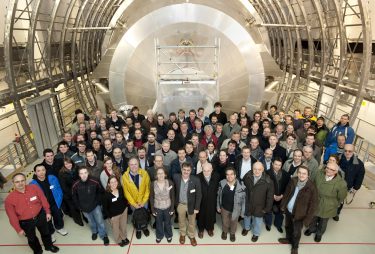 In this 2010 image, members of the KATRIN experiment pose in front of the spectrometer after it was installed at the Karlsruhe Institute of Technology.

KATRIN cuts the mass estimate for the elusive neutrino in half

Newswise — An international team of scientists has announced a breakthrough in its quest to measure the mass of the neutrino, one of the most abundant, yet elusive, elementary particles in our universe.

At the 2019 Topics in Astroparticle and Underground Physics conference in Toyama, Japan, leaders from the KATRIN experiment reported Sept. 13 that the estimated range for the rest mass of the neutrino is no larger than 1 electron volt, or eV. These inaugural results obtained earlier this year by the Karlsruhe Tritium Neutrino experiment — or KATRIN — cut the mass range for the neutrino by more than half by lowering the upper limit of the neutrino's mass from 2 eV to 1 eV. The lower limit for the neutrino mass, 0.02 eV, was set by previous experiments by other groups.

"Knowing the mass of the neutrino will allow scientists to answer fundamental questions in cosmology, astrophysics and particle physics, such as how the universe evolved or what physics exists beyond the Standard Model," said Hamish Robertson, a KATRIN scientist and professor emeritus of physics at the University of Washington. "These findings by the KATRIN collaboration reduce the previous mass range for the neutrino by a factor of two, place more stringent criteria on what the neutrino's mass actually is, and provide a path forward to measure its value definitively."

The KATRIN experiment is based at the Karlsruhe Institute of Technology in Germany and involves researchers at 20 research institutions around the globe. In addition to the University of Washington, KATRIN member institutions in the United States are:

Under Robertson and Wilkerson, the University of Washington became one of KATRIN's founding member institutions in 2001. Wilkerson later moved to the University of North Carolina at Chapel Hill. Formaggio and Parno began their involvement with KATRIN as UW researchers and later moved to their current institutions. In addition to Robertson, other current UW scientists working on the KATRIN experiment are research professor of physics Peter Doe, research associate professor of physics Sanshiro Enomoto and Menglei Sun, a postdoctoral researcher in the UW Center for Experimental Nuclear Physics and Astrophysics.

Neutrinos are abundant. They are one of the most common fundamental particles in our universe, second only to photons. Yet neutrinos are also elusive. They are neutral particles with no charge and they interact with other matter only through the aptly named "weak interaction," which means that opportunities to detect neutrinos and measure their mass are both rare and difficult.

Neutrinos are also mysterious particles that have already shaken up physics, cosmology and astrophysics. The Standard Model of particle physics had once predicted that neutrinos should have no mass. But by 2001, scientists had shown with two detectors, Super-Kamiokande and the Sudbury Neutrino Observatory, that they actually do have a nonzero mass — a breakthrough recognized in 2015 with the Nobel Prize in Physics. Neutrinos have mass, but how much?

"Solving the mass of the neutrino would lead us into a brave new world of creating a new Standard Model," said Doe.

The KATRIN discovery stems from direct, high-precision measurements of how a rare type of electron-neutrino pair share energy. This approach is the same as neutrino mass experiments from the 1990s and early 2000s in Mainz, Germany, and Troitsk, Russia, both of which set the previous upper limit of the mass at 2 eV. The heart of the KATRIN experiment is the source that generates electron-neutrino pairs: gaseous tritium, a highly radioactive isotope of hydrogen. As the tritium nucleus undergoes radioactive decay, it emits a pair of particles: one electron and one neutrino, both sharing 18,560 eV of energy.

KATRIN scientists cannot directly measure the neutrinos, but they can measure electrons, and try to calculate neutrino properties based on electron properties.

Most of the electron-neutrino pairs emitted by the tritium share their energy load equally. But in rare cases, the electron takes nearly all the energy — leaving only a tiny amount for the neutrino. Those rare pairs are what KATRIN scientists are after because — thanks to E = mc2 — scientists know that the miniscule amount of energy left for the neutrino must include its rest mass. If KATRIN can accurately measure the electron's energy, they can calculate the neutrino's energy and therefore its mass.

The tritium source generates about 25 billion electron-neutrino pairs each second, only a fraction of which are pairs where the electron takes nearly all the decay energy. The KATRIN facility in Karlsruhe uses a complex series of magnets to channel the electron away from the tritium source and toward an electrostatic spectrometer, which measures the energy of the electrons with high precision. An electric potential within the spectrometer creates an "energy gradient" that electrons must "climb" in order to pass through the spectrometer for detection. Adjusting the electric potential allows scientists to study the rare, high-energy electrons, which carry information concerning the neutrino mass.

U.S. institutions have made broad contributions to KATRIN, including providing the electron-detector system — the "eye" of KATRIN — which looks into the heart of the spectrometer, an instrument built at the UW. The University of North Carolina at Chapel Hill led the development of the detector's data acquisition system, the "brains" of KATRIN. MIT's contribution was the design and development of the simulation software used to model the response of KATRIN. The Lawrence Berkeley National Laboratory contributed to the creation of the physics analysis program and provided access to national computing facilities, and quick analysis was enabled by a suite of applications that originated at the UW. The Case Western Reserve University was responsible for the design of the electron gun, central to calibrating the KATRIN apparatus. Carnegie Mellon University contributed primarily to analysis, with special attention to background and to fitting, and assisted in analysis coordination for the experiment.

With tritium data acquisition now underway, U.S. institutions are focused on analyzing these data to further improve our understanding of neutrino mass. These efforts may also reveal the existence of sterile neutrinos, a possible candidate for the dark matter that, though accounting for 85% of the matter in the universe, remains undetected.

"KATRIN is not only a shining beacon of fundamental research and an outstandingly reliable high-tech instrument, but also a motor of international cooperation, which provides first-class training of young researchers," said KATRIN co-spokespersons Guido Drexlin of the Karlsruhe Institute of Technology and Christian Weinheimer of the University of Münster in a statement.

Now that KATRIN scientists have set a new upper limit for the mass of the neutrino, project scientists are working to narrow the range even further.

"Neutrinos are strange little particles," said Doe. "They're so ubiquitous, and there's so much we can learn once we determine this value."

The U.S. Department of Energy's Office of Nuclear Physics has funded the U.S. participation in the KATRIN experiment since 2007.

Caption: The layout and major features of the KATRIN experimental facility at the Karlsruhe Institute of Technology.

Caption: The spectrometer for the KATRIN experiment, as it works its way through the German town of Eggenstein-Leopoldshafen in 2006 on its way to the nearby Karlsruhe Institute of Technology.

Caption: In this 2010 image, members of the KATRIN experiment pose in front of the spectrometer after it was installed at the Karlsruhe Institute of Technology.