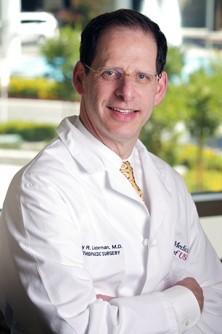 Newswise — LOS ANGELES – Jay R. Lieberman, MD, chair and professor of orthopedic surgery at the Keck School of Medicine of the University of Southern California has received a five-year, $2.2 million grant from the National Institutes of Health’s National Institute of Arthritis and Musculoskeletal and Skin Diseases to research gene therapy to enhance repair of extensive bone injuries. Examples of these types of injuries include fractures with extensive bone loss, non-healing fractures, failed spinal fusion and revision of total joint replacement.

“There are a number of bone injuries that are very difficult to repair and lack satisfactory solutions,” Lieberman says. “My goal with this grant is to determine whether genetically modifying human bone marrow cells to overproduce BMP will help heal large bone defects in an animal model and, ultimately, provide a better alternative for repairs in humans.”

Lieberman’s study will determine the efficacy and safety of the gene therapy as well as establish a cellular dose of the genetically manipulated cells that can be scaled up for potential use in humans.

This press release references support by the National Institutes of Health under award number 2R01AR057076-06A1 ($2,284,028 over five years). One hundred percent of the project’s funding will be federally funded.