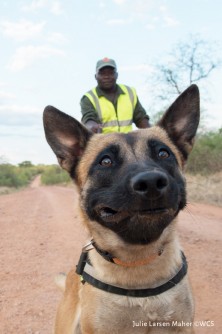 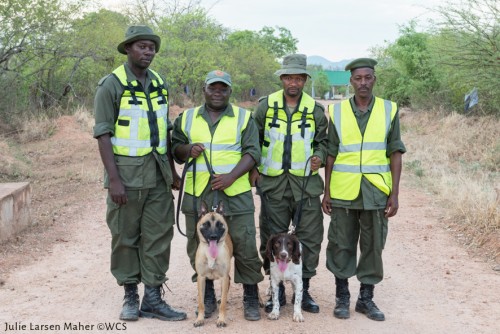 Image of the detection dog team.

Under the guidance of WCS and Wagtail UK Ltd., the newly deployed team of specially trained dogs and handlers from Tanzanian National Parks (TANAPA) can detect a variety of illegal wildlife products, arms and ammunition.

The recent ivory seizures were initiated on Saturday, August 13, when authorities received a report of illegal ivory being stored at a specific residence. The mobile dog unit was deployed to conduct a late night house search. Jenny, a Belgian Malinois dog, and her handler checked all the rooms—some packed high with bags of rice—but to no avail.

However, within minutes of starting to search the compound outside, Jenny’s keen sense of smell detected something hidden under a parked vehicle. Her trusty nose led to the discovery of four concealed tusks hidden in plastic. TANAPA officials reported that the four tusks found are small, presumably from young elephants that had not even reached middle age.

One man was immediately taken into custody and is assisting the authorities with their enquiries. The detection dog unit will now work with police, zonal anti-poaching units, and other authorities in the region who will follow up the case.

WCS conservationists pointed out that the recent seizures and arrest stemmed from two years of work on the project, ranging from the building of safe kennels, training the dogs and handlers, ensuring the dogs’ health in the Ruaha environment, and equipping a special vehicle that can be rapidly deployed when intelligence arrives.

“This ivory bust shows what a powerful tool the detection dog unit is” said WCS Project Director Aaron Nicholas. “It adds to the government’s strategy to curb elephant poaching in Tanzania. Well done to the TANAPA handlers and staff and our four legged front-line friends.”

“This arrest is a very clear warning to those wanting to poach elephants in the Ruaha-Rungwa landscape” said Dr. Tim Davenport, WCS Country Director in Tanzania. “Jenny and Dexter are now on duty, and they will find you.”

The canine unit is supported by the U.S. Chamber of Commerce in Tanzania as well as the Wyss Foundation, which also supports WCS's anti-poaching efforts in the region. 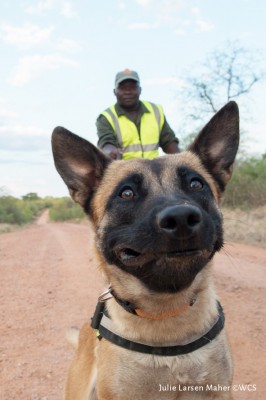 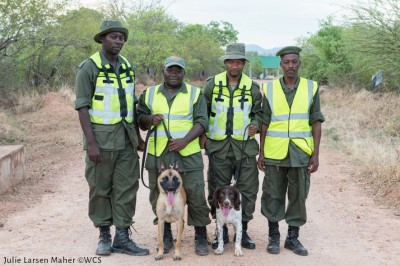