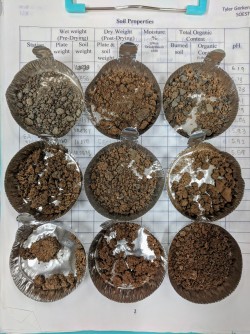 Soil samples were collected from different land uses (urban, agriculture, and native forests) on Hawaii Island. The research found that levels of pathogenic bacteria are highest in urban and agricultural soils. 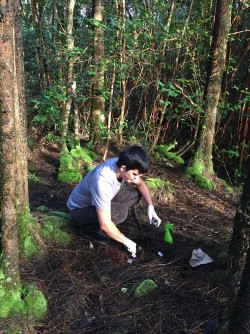 Tyler Gerken, recent graduate from the University of Washington, School of Public Health, collecting soils from native forests on Hawaii Island. The research team determined levels of the different bacteria in the samples. 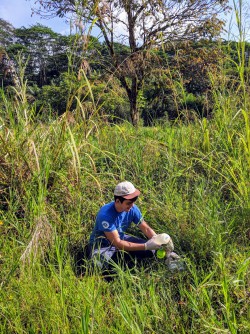 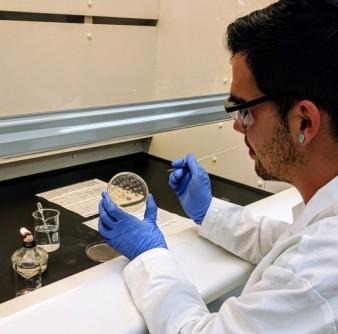 Newswise — September 7, 2022 - During heavy rains, Hawaii’s streams, rivers, and nearshore waters change on microscopic levels. Bacteria in these aquatic systems increase, and some of these bacteria can be harmful to human health. They can cause problems like gastroenteritis – also known as the stomach flu – as well as skin and respiratory diseases.

It is known in the science community that soils are a common source of these disease-causing – or pathogenic – bacteria. What isn’t as well-known, though, is what kinds of soils are the major suppliers of these microbial intruders.

In contrast, pathogenic bacteria are present at low levels in soils in native forests. That makes it unlikely that these forest soils are a major source of the bacteria found in Hawaii’s inland and coastal waters.

The study measured levels of three different bacteria in urban, agricultural, and native forest soils. One of the bacteria was Staphylococcus aureus. It causes staph infections. “In Hawaii, people often mention they’ve had staph infections,” says Wiegner. “This may be caused by exposure to harmful bacteria in nearshore water activities like swimming, canoeing, and surfing.”

Of particular concern to researchers and the medical community is one of the antibiotic-resistant versions, methicillin-resistant S. aureus (MRSA).

The other two bacteria in the study were Enterococcus and Clostridium perfringens. Both bacteria are called fecal indicator bacteria. Levels of these bacteria can be used as indicators of pollution from sewage in most places in the United States. But in Hawaii, the situation is more complicated.

Enterococcus can thrive in the tropical soils of Hawaii. “That makes it unclear whether high levels of Enterococcus found in Hawaiian waters following storms are from sewage pollution, soils, or both,” says Wiegner. In response, Hawaii uses Clostridium bacteria as a secondary bacterial indicator for detecting sewage pollution.

The study took place in the Hilo Bay watershed on Hawaii Island, often called the Big Island. Researchers collected soil samples from urban, agricultural, and native forest areas. Then they determined levels of the different bacteria in the samples.

That means reducing human and animal activity can decrease levels of soil bacteria. This could be particularly useful in areas near water bodies, and could reduce how much bacteria can be transported to the water bodies during heavy rainfall.

“It is important for watershed and community health managers to identify sources of pathogens entering waterbodies,” says Wiegner. “Appropriate management action can reduce the concentrations of bacteria in soils. They can also reduce their transport during storms.”

Management actions could include building green infrastructure. Examples of green infrastructure include restoring and maintaining riparian buffers, constructing wetlands for stormwater retention, and beach grooming. Building green infrastructure has improved water quality in places like the Great Lakes region in the United States and coastal waters of New Zealand. “These measures can reduce the transport of bacteria from soils to water bodies in Hawaii,” says Wiegner. “That could ultimately reduce bacterial transmission during water recreational activities.”

This year, 2022, is the 50th anniversary of the Clean Water Act. To learn more about research related to clean water, visit https://www.soils.org/clean-water-act.