Newswise — SAN DIEGO, Oct 29, 2018 – They were after the prize, and maybe a little bit of glory. But mostly, UC San Diego junior Luyanda Mdanda thought of his native Africa, and classmate Hannah Peterson pictured her grandfather back home in Oregon. Those were the lives they wanted to help, when they entered and then won against some formidable teams in the annual UC Health Hack.

And so Peterson, a Data Science major, and Mdanda, a Cognitive Science major enrolled in many data science classes, took their big idea on how to help people get access to healthcare faster and more economically. They won the annual healthcare hackathon contest with their elegantly simple phone app designed to work with any mobile phone or device.

"I thought of my sister who broke her arm and waited hours in the emergency room, when a simple visit to urgent care would have meant she spent less time in pain, and it would have cost so much less," explained Mdanda, a native of South Africa.

For Peterson, she thought of grandfather Don Carroll, who comes from a generation that sees no reason to buy phones newer than their original non-internet-linked flip phones. She was pleased their app could help people like him.

Hackathons bring people together to focus intensively on solving a problem using technology. This year’s annual UC Health Hack, held in October, was hosted by UC San Diego Health and members of the UC’s six health systems. It draws students, physicians, and industry professionals to address issues related to integrative medicine and global health, within the forum of a fast-paced competition. Armed with personal motivation and what they hoped was a great idea, they had only two days from contest prompt and final delivery of the app. The hackathon was like a professor giving them a final exam prompt, except instead of GPAs at stake, there was $8,000 in prize money split by the three winning teams.

They dove into the challenge, brainstorming and coding. The duo developed an app they dubbed TimER as an easy-to-use tool for prospective patients to get health problems addressed faster and more economically. Their app allows people to click on a menu, to feed in a person's basic symptoms and Zipcode or city, then the app offers the approximate wait time to all healthcare outlets closest to the chosen location, including urgent cares and emergency rooms. It will even perform some level of triaging of symptoms, directing prospective patients to a healthcare outlet based on severity levels they chose on the drop-down menus.

Both hacker champions are students of Bradley Voytek, an associate professor of Cognitive Science who directs Halıcıoğlu Data Science Institute fellowships and other programs. The Institute's mission is to facilitate effective integration of the discipline of data science into academia, industry and the community.

“The TimER chatbox concept that Hannah and Luyanda developed is so innovative, yet so simple, that It’s a wonder no one had thought of it before!” said Christopher Longhurst, MD, Chief Information Officer and Associate Chief Medical Officer at UC San Diego Health.

“When we launched UC Health Hack we were hoping to tap into the innovative and multidisciplinary minds all around us. We’ve been impressed by the solutions that the participants have dreamed up at our event to help address some of today’s vexing problems in health care,” said Longhurst.

Mdanda is no stranger to hackathons, having won one in his freshman year at UC San Diego. Peterson's first hackathon was last year's Health Hack, which she entered with a different partner. Mdanda and Peterson have been friends since freshman year, living in the same dorm at Warren College. "We're very different, but we get along great," Peterson said.

They're different all the way down to their preferred operating systems: He likes PCs, she prefers Macs. Mdanda was thrilled about how their different strengths complemented each other. They agree that he's the concept idea partner, while she's got the organizational focus.

"This was an idea I've had for awhile. Once we got the prompt, she knew exactly how to break it down and what we needed to do step by step," he said, beaming at his partner. She dug into the data to display to the judges why their app could make a difference: The average wait time for ERs being approximately 145 minutes, versus just over 25 minutes with an urgent care. Their data displayed the significant average cost differences for receiving treatment for nine common complaints, such as $595 for an ER visit treating bronchitis, versus $127 for an urgent care.

They used a combination of data science tools for their app development, including Twilio communications platform, Epic Systems software used by many healthcare systems for electronic medical records and Python, an open-source programing language popular for its universal usage and compatibility with other systems.

The competition was tough, said Peterson, especially considering that UC San Diego hosts the largest undergraduate data science major in the nation and is a national leader in health science, engineering and cognitive science. The hackathon brought teams of up to five members to collaborate over the two-day period to solve critical healthcare problems, under the guidance of experts.

Participants developed their ideas with prototyping software, hardware supplies, and fabrication labs. All projects were presented to judges, with the finalists presenting to a panel of judges who chose the three winning teams.

"One group made a facial recognition program, it involved some complicated crazy tech, the idea we were competing with graduate students was scary," she said. But the benefits of simplicity is what they were after, using data science to build a tool to help the maximum number of people. Their app will work even on basic non-internet connected flip phones favored by people like her grandfather Carroll, they said.

Winning the Health Hack made that Saturday, Oct. 7, became a great day for them both. "Luyanda was all 'whoo-hoo' and he ran up to get the award, I just got up in a daze," she recalls. He let her hold the $5,000 grand prize check on the walk back to the dorms, while he blasted celebratory music on his Samsung Galaxy smartphone back to the dorms, where they are both Resident Advisors.

Then she discovered her mother, Cindi Peterson, had come down from Oregon to truly surprise her, by gifting her with her old car, a 2008 sedan. To have her first car to drive around in Southern California has already been sublime, Peterson said. Her share of the prize money she said will most likely be spent on exploring new possibilities with her wheels.

ABOUT THE HALıCıOĞLU DATA SCIENCE INSTITUTE The mission of the Halicioglu Institute is to build scientific foundations for the new field to help solve the world's most pressing problems. Our teams explore principles, methods and tools that enable us to understand the nature of digital data, and the interactions of this new field of enquiry to existing disciplines of human enquiry. We are committed to training and educating -- at all levels -- the next generation of leaders in data science. Contact: Lisa Petrillo, Media-Communications Specialist Halicioğlu Data Science Institute | UC San Diego [email protected] | 858/246-2491 | 858/382-1252 (cell) 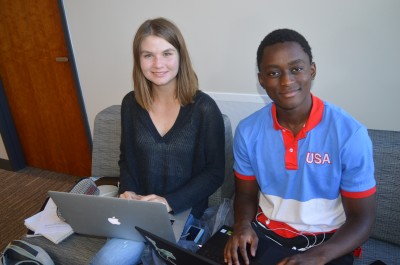