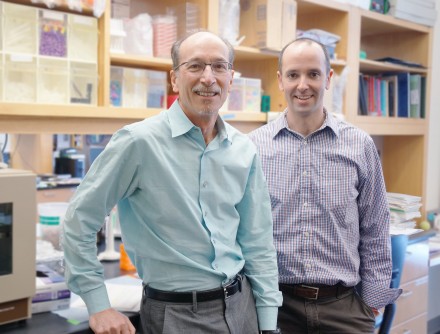 Newswise — The human heart is a fine-tuned engine – more advanced than the finest Ferrari despite being simply designed by Mother Nature. It’s so carefully constructed that if it gets off kilter in the slightest way, it can throw the engine out of whack. The heart simply won’t perform as well – or at all.

In a study released February 20, 2015 in the inaugural issue of the journal Science Advances, molecular physiologists from the University of Vermont’s Cardiovascular Research Institute David Warshaw, Ph.D., Michael Previs, Ph.D., and colleagues discovered that a tiny piece of the engine known as myosin-binding protein C (cMyBP-C) is key to maintaining its highly precise tuning. They discovered that the position of this protein in the muscle cells of the heart is critical to making the engine run properly, and also suggest that an adjustment to cMyBP-C could resolve many heart problems.

When this protein malfunctions, the heart fails – as evidenced by the malfunctions underlying the leading cause of a condition called hypertrophic cardiomyopathy that’s a common cause of “sudden death” in otherwise healthy young athletes.

Previs, an assistant professor of molecular physiology and biophysics, and Warshaw, professor and chair of molecular physiology and biophysics, used powerful microscopes to look inside the sarcomere, a part of the heart muscle tissue that is one-fiftieth the diameter of a human hair. It’s an accordion-like tube that contracts and expands with every heartbeat. Trillions or more sarcomeres must contract simultaneously.

“To pump blood efficiently, they all have to be doing it at the same time,” Warshaw says.

Two proteins in the sarcomere help it contract. The protein myosin is the motor. It pushes or pulls another protein, actin, which is like a rope that draws the sarcomere in and releases it out, so it can refill with blood. Myosin always tries to grab and move actin. It needs a control mechanism to initiate this action at the precise moment when the sarcomere needs to contract.

cMyBP-C modulates the myosin, either slowing down or speeding up its interaction with actin. The protein is located at the center of the sarcomere tube, not at its ends. Previs, Warshaw and their coauthors wondered why this crucial element is only present in that specific spot.

That’s where calcium comes in. With each pump, the heart muscle cells release this element, which functions as a spark plug for the engine. Calcium’s job in the sarcomere is to move another protein that creates a barrier between myosin and actin. Calcium gets that protein out of the way, so the myosin can bind to the actin at the right moment.

The movement of calcium in such small spaces is nearly impossible to detect, so Previs and Warshaw tapped the expertise of W. Jonathan Lederer, M.D., Ph.D., professor of physiology at the University of Maryland School of Medince and director of the Center for Biomedical Engineering and Technology, to measure the impossible. With the help of Benjamin Prosser, Ph.D. at the University of Pennsylvania, they showed that calcium enters the sarcomere at its outside ends. As it makes its way down the tube, a gradient forms, so it doesn’t have the same power at the center to move that barrier protein. With such a gradient, the timing and precision of the muscle contraction would be off, but, the authors conclude, cMyBP-C stays in the center of the sarcomere, thereby helping calcium do its job as well there as it does in higher concentrations at the ends.

The current study uses an animal model of a healthy heart to understand cMyBP-C’s intrinsic function.

“Our curiosity into the function of the protein was originally piqued because we knew that issues with this protein are involved with diverse forms of cardiac disease,” Previs says.

Now that the researchers understand what cMyBP-C is doing under normal conditions, the next logical step is to figure out what goes wrong with cMyBP-C in a diseased heart. Once determined, scientists can develop pharmaceutical treatments using cMyBP-C to fix those unhealthy hearts.

“Myosin-binding protein C is a perfect modulator,” says Previs. “You can fine-tune how the engine is performing by simply manipulating the functional impact of this critically important protein.”