Keeping Up the Pressure 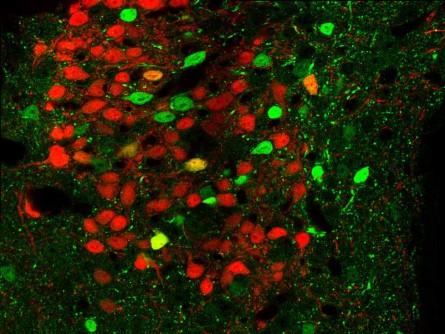 Brain tissue from genetically engineered mice. Neurons that express CRFR1 appear in green and those that release the neurotransmitter CRF are in red. The image was obtained with fluorescence microscopy

Newswise — In addition to the classic stress response in our bodies – an acute reaction that gradually abates when the threat passes – our bodies appear to have a separate mechanism that deals only with chronic stress. These Weizmann Institute of Science findings, which recently appeared in Nature Neuroscience, may lead to better diagnosis of and treatment for anxiety and depression.

Dr. Assaf Ramot, a postdoctoral fellow in Prof. Alon Chen’s group in the Institute’s Department of Neurobiology, led the research pinpointing a small, previously unknown group of nerve cells in the paraventricular nucleus, or PVN, within the hypothalamus – a part of the brain involved in regulating many of the body’s reactions. These cells’ position in the PVN led the researchers to suppose that the nerve cells play a role in the stress response.

Prof. Chen explains that in the well-known stress response, the neurotransmitter corticotrophin releasing factor (CRF) is released from the PVN and goes to the pituitary gland. The pituitary gland releases hormones that then cause the adrenal gland to flood the bloodstream with the “stress hormone” cortisol. The cortisol, along with the regular stress response, lowers the production of CRF, thus causing a negative feedback loop in which the mechanism slows down and stops.

A positive-feedback loopThe newly discovered nerve cells express a receptor, CRFR1, on their outer walls, which enables them to take in the message of the CRF neurotransmitter. The scientists’ experiments showed that, in mice, the cortisol actually increases the number of CRFR1 receptors on these nerve cells, suggesting a positive feedback loop that could be self-renewing, rather than abating.

Working with Prof. Nicholas Justice’s group at the University of Texas, Houston, Prof. Chen, Dr. Ramot, and their group first characterized this special population of nerve cells, labeling them with fluorescent proteins in the brains of genetically engineered mice. When they removed the adrenal glands of these mice, thus preventing the production of cortisol, the receptors did not appear on the PVN nerve-cell walls, while injecting synthetic stress hormones caused them to appear and restart the chain reaction.

Next, the researchers asked when and how the CRFR1 cycle is initiated. They compared mice genetically engineered to lack the receptor with a control group and exposed them to different kinds of stress, testing the hormones in their blood afterward. When the mice experienced acute stress, both groups reacted in a similar manner, and their hormone levels were also similar. But chronic stressors told a different story: The genetically engineered mice stayed calmer and had lower levels of the cortisol-like hormone.

“In other words,” says Dr. Ramot, “the CRFR1 system is a separate one that evolved to deal with chronic stress.” Prof. Chen adds: “Some studies have shown that patients suffering from depression have more of this receptor than average, and this suggests further avenues of research and even ways to treat, in the future, disorders that arise from chronic stress.”

Prof. Alon Chen’s research is supported by the Carl and Micaela Einhorn-Dominic Center for Brain Research, which he heads; the Nella and Leon Benoziyo Center for Neurosciences, which he heads; the Norman and Helen Asher Center for Brain Imaging, which he heads; the Henry Chanoch Krenter Institute for Biomedical Imaging and Genomics; the Perlman Family Foundation, Founded by Louis L. and Anita M. Perlman; the Irving Bieber, M.D. and Toby Bieber, M.D. Memorial Research Fund; the Adelis Foundation; the Appleton Family Trust; Mr. and Mrs. Bruno Licht, Brazil; and the Ruhman Family Laboratory for Research in the Neurobiology of Stress.The Weizmann Institute of Science in Rehovot, Israel, is one of the world’s top-ranking multidisciplinary research institutions. The Institute’s 3,800-strong scientific community engages in research addressing crucial problems in medicine and health, energy, technology, agriculture, and the environment. Outstanding young scientists from around the world pursue advanced degrees at the Weizmann Institute’s Feinberg Graduate School. The discoveries and theories of Weizmann Institute scientists have had a major impact on the wider scientific community, as well as on the quality of life of millions of people worldwide.