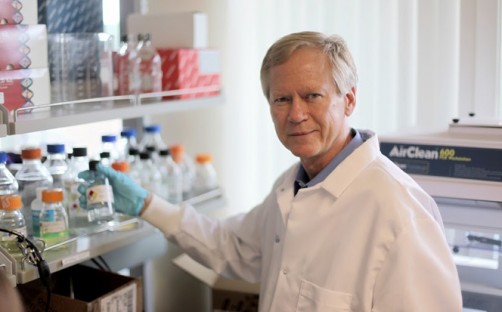 Paul Keim and his team at the Center for Microbial Genetics and Genomics have vast experience with the pathogen that causes melioidosis.

Newswise — Research motivated to blunt the sinister potential of a deadly infectious disease may hold the promise of life-saving treatments at the edge of a transformation in medical care.

With $7 million in funding from the Pentagon’s Defense Threat Reduction Agency, a research team led by Paul Keim, Regents’ professor at Northern Arizona University, will employ expertise that ranges from genetic sequencing to high-performance computing in the quest to treat, and perhaps even prevent, melioidosis.

“One of the clues to our condition as humans is how our immune system is working,” said Keim, whose Center for Microbial Genetics and Genomics will work with blood samples infected with Burkholderia pseudomallei, the bacteria that causes melioidosis. “This whole project is designed to understand how the immune system responds to an infection.”

The complexity of the disease often confounds clinicians. Melioidosis, which is prominent in parts of Southeast Asia and northern Australia, is known as “the great mimicker” because it produces symptoms that can look like flu, pneumonia, sepsis or even a sexually transmitted disease, Keim said.

But the pathogen, usually found in soil and water, is also widely available to those who would put it to use for other purposes.

“It’s an unusual disease and it doesn’t commonly occur in the United States, but the United States is very interested in it because it could be used as a biological weapon,” Keim said. The focus of this research, though, is more attuned to what Keim calls “a translational twist.”

“Once we understand the basic science we’ll know better how to advise physicians in its treatment and prevention,” Keim said. “From our point of view, it’s a chance for us to understand how humans react to infectious diseases, and to come up with better diagnostics and therapeutics, and maybe even a vaccine. And what we learn will be applicable to lots of other diseases.”

Yet to seek a single, sweeping treatment would constitute an outdated approach at a time when genetic precision raises hope for accurate, quick diagnostics that lead to care attuned to individual patients.

At least, that’s the idea behind precision medicine, which advocates see as the future of effective healthcare. Using genetics and microbiology to create a full context for each patient, and accurate diagnostics to pinpoint diseases, would lead to highly specific treatments and, presumably, more successful outcomes.

Over the span of the five-year project, MGGen and its collaborator in Australia, the Menzies School of Health Research, plan to develop the diagnostics and treatments that would make a precision approach to melioidosis possible.

The Australian group will provide blood samples from patients at its clinics who appear to be infected. Northern Australia is one region where melioidosis frequently occurs. Analysis of those samples to determine how they raise antibodies against the disease will take place at NAU.

“We’ll build tests for specific parts of the pathogen,” Keim said. “The bacteria has about 5,000 genes, so we will look at the proteins from each one of them and try to figure out if they are triggering a response from the host.”

Keim described the exacting process as “tearing the pathogen into little bitty parts,” then determining which part is being attacked to stop the infection. “We could take that information to make a streamlined, cheap and effective test that a physician can use,” Keim said.

The lab has extensive experience with the bacteria, which made it an ideal site for the basic research portion of the project.

“This is a dangerous pathogen, but we have a high-containment laboratory here at NAU and the people trained to handle it,” Keim said, noting that the lab has already sequenced over 1,000 isolates of B. pseudomallei.

The project will produce tremendous amounts of information, so the recent start-up of a powerful computer cluster at NAU, with a high-speed connection to the lab, will play a significant role.

“High-performance computing is a big part of this because we have to analyze all these genes across all these bacteria and figure out what it all means,” Keim said.