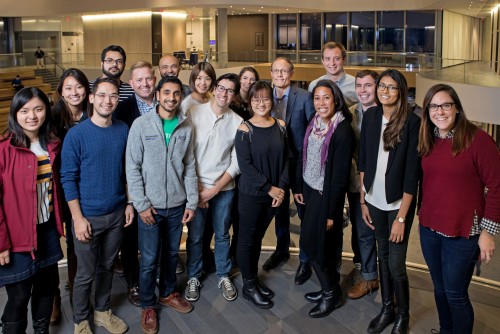 Newswise — The Kellogg School of Management at Northwestern University raised $75 million in the fiscal year 2017, setting a fundraising record for Kellogg, thanks in part to Larry W. ’92 and Beth Gies, who donated $15 million.

“The success of our fundraising is a testament to the collective power of our alumni and friends, who have committed to our mission and core values,” said Sally Blount, dean of the Kellogg School of Management. “With the Global Hub, our new home, we have opened doors to a new era of business leaders, thinkers and innovators. I’m confident our engaged community will continue to invest in Kellogg’s strategic priorities.”

Kellogg’s fundraising effort is part of We Will. The Campaign for Northwestern, the University-wide effort to raise $3.75 billion from a community of 141,000 supporters to advance Northwestern’s strategic initiatives.

“The generosity of the Northwestern community throughout the ‘We Will’ Campaign is having a significant impact on the University and on the world,” said Northwestern University President Morton Schapiro. “This leadership commitment has enabled us to bring our outstanding business and economics programs together in one state-of-the-art space and to expand our commitment to students. We are very grateful for the continuing support.”

Kellogg has named the Global Hub’s central plaza in honor of the Gies family in recognition of their generous gift. Gies Plaza, which is a stunning 3-story, 6,000-square-foot central atrium situated at the heart of the building, is the meeting place for the entire Kellogg community. It welcomes visitors from around the world, draws students and faculty together from all compass points and encourages collaboration through its two sets of 34-foot-wide Spanish Steps, which are surrounded by soft benches and tables.

“My Kellogg education was instrumental in my development as a leader,” said Larry Gies, president and chief executive officer of Madison Industries and an active member of the Kellogg community. “Beth and I strongly believe in Kellogg’s mission to educate, equip and inspire tomorrow’s business leaders to have a positive impact on society.”

Gordon Segal ’60 and Carole Browe Segal ’60, co-founders of Crate & Barrel and longtime supporters of Northwestern, recently made a $5.2 million gift to Kellogg.

In recognition of their latest gift, the Global Hub’s marketplace will be named Gordon’s Marketplace, and a design studio will be named for the Segals.

“Northwestern wanted to build a world-class building to go with our world-class business school,” said Gordon Segal, who played a leading role in the design and development of the Global Hub as chair of the educational properties committee for Northwestern’s Board of Trustees. “The Global Hub epitomizes the legacy, spirit and vision of Kellogg.”

In addition to enabling construction of the new Global Hub, funds raised by Kellogg also are supporting scholarships as well as faculty research, thought leadership and global innovation.

“Kellogg continues to create so many opportunities for its diverse community of students,” said Ann M. Drake ’84, chairman and chief executive officer of DSC Logistics and Kellogg’s most philanthropic alumna who has made a tremendous impact advancing women in business. “My Kellogg experience helped me transform my leadership approach and take on new challenges, and I hope my gift can help future generations do the same.”