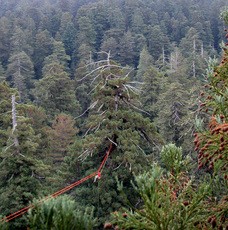 Stephen Sillett traverses into the crown of the largest living redwood tree (at 42,500 cubic feet), known as Sulimo, in near Crescent City, Calif., in 2004.

A treetop hundreds of feet up yields a panorama of Atlas Grove in Prairie Creek Redwoods State Park in Humboldt County, Calif. The grove is one of most structurally complex remaining redwood forests. 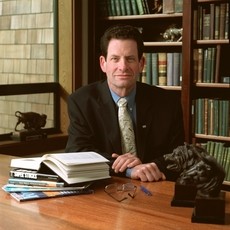 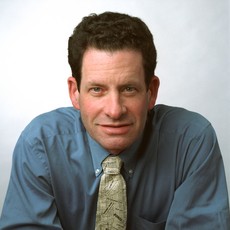 Newswise — Suspended by ropes and harnesses, a Humboldt State University botanist explores the canopies of the world's tallest trees. Now, thanks to a new chair " specifically the Kenneth L. Fisher Chair in Redwood Forest Ecology " he will be able to take this research to new proverbial heights.

Announced by the university Feb. 3, the establishment of the first endowed chair to support the study of the redwood forest " and the first named chair at Humboldt State " will allow Stephen C. Sillett, an HSU biology professor, to explore more aggressively the ecology of the coastal redwoods. With giants eclipsing 360 feet, the redwoods are the tallest trees in the world.

Sillett specifically focuses on the complex " and heretofore unknown " communities of organisms that live hundreds of feet up in the redwoods and on the biophysical limits to tree height in an attempt to answer the question, "How tall can trees grow?" Recently, he has begun considering how second-growth redwood forests might be managed to accelerate the development of old-growth forest complexity and biodiversity.

Sillett's research has been published in Nature, the American Journal of Botany, Ecological Applications, Bryologist, Northwest Science and other publications. His work has also been profiled in The New Yorker, Discover, New Scientist and the National Geographic.

Fisher, a 1972 Humboldt State alumnus, is founder, chief executive officer and chief investment officer of Fisher Investments, a $28 billion global money-management firm that serves high-net-worth individuals and institutions throughout the world. Fisher Investments is headquartered in Woodside, Calif., on a mountain in the redwood region south of San Francisco.

The author of "Super Stocks," "The Wall Street Waltz" and "100 Minds that Made the Market," Fisher has for 21 years written "Portfolio Strategy," a column in Forbes magazine. He also writes a monthly column for the British magazine Bloomberg Money.

Long before starting Fisher Investments, Ken Fisher came to Humboldt State in the late 1960s intending to study redwood forestry. Though he became an economics major instead, he has maintained a fascination with redwoods by developing a private library of more than 3000 volumes of regional logging history, excavating 35 abandoned lumber mill sites, and collecting and cataloguing thousands of artifacts.

"All of that time," he said, "it was backward-looking from a romantic interest in the way 19th-century steam-era redwood lumbering was done." Establishing the Kenneth L. Fisher Chair in Redwood Forest Ecology, he said, is a way "to create a forward motion"¦a small step to creating a transformation in the way we understand trees and forests."

Fisher is particularly drawn to Sillett's pioneering work, amazed at the botanist's discovery of elevated communities of crustaceans, lichens, other organisms, tiny ponds and rich soil deposits high in the trees.

"Steve has the ability to find things out that extend to broader implications," Fisher said.

Sillett, who began teaching at Humboldt in 1996 after earning a doctorate at Oregon State University, has explored the stratified " and rarefied " biodiversity among the crowns of redwood forests in national and state parks in Humboldt County, Calif., for a decade. He has also extensively studied old-growth giant Sequoia redwoods in the Sierra Nevada mountains, Douglas fir forests in Oregon and Washington, and the tallest eucalyptus in Australia. He is currently considering what it would take to restore the health of some of the ancient redwood groves along the Avenue of the Giants in which the tops of many trees are dying.

Not shy about going out on a limb, Sillett says, "I think I can fix it. It would involve pretty hard-core re-engineering of water courses (along the highway)"¦and years of effort to gather data that demonstrate it quantitatively."

The gift that supports the named chair will provide approximately $90,000 annually, representing investments of approximately $3.6 million, to support research in redwood ecology in perpetuity. It will fund a Humboldt State professor's release from half of their teaching schedule to focus on research. It will also provide support for graduate students, laboratory and field equipment and other needs. Sillett's term as the Kenneth L. Fisher Chair in Redwood Forest Ecology will extend at least two years and may be renewed.

HSU President Rollin C. Richmond said, "Ken Fisher's visionary benevolence will foster a stronger understanding of redwood ecology by supporting the research of a renowned and gifted scholar. And the results of that research will help our community better understand the science and phenomena at work in these awe-inspiring forests that dominate our region. The gift also will give some Humboldt State graduate students unprecedented opportunities to participate in the explorations into the secrets of redwood ecology.

"Humboldt State greatly appreciates " and eagerly anticipates " the discoveries this new arrangement will accomplish," said Richmond. "We also appreciate what it represents -- the confidence of one of Humboldt's most successful alumni in the institution's capacity for cutting-edge research."