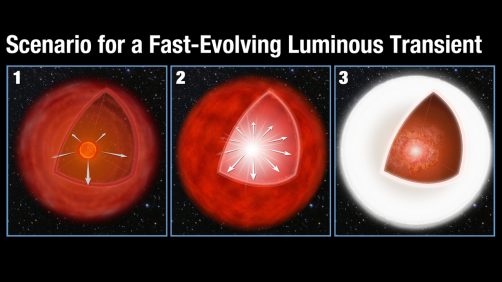 SPACE OBSERVATORY CAPTURES DETAILS OF AN UNUSUAL STELLAR DETONATION (ARTIST'S CONCEPT). The universe is so huge that it's estimated that a star explodes as a supernova once every second. Astronomers capture a small fraction of these detonations because they are comparatively short-lived, like fireflies flickering on a summer evening. After skyrocketing to a sudden peak in brightness, a supernova can take weeks to slowly fade away. For the past decade astronomers have been befuddled by a more curious "flash-in-the-pan" that pops up and then disappears in just a few days, not weeks. It's called a Fast-Evolving Luminous Transient (FELT). Only a few FELTs have been seen in telescopic sky surveys because they are so brief. Then along came NASA's Kepler Space Telescope that caught a FELT in the act. Kepler's outstanding ability to precisely record changes in the brightness of celestial objects was designed to look for planets across our galaxy. But a great spinoff from the observatory is to go supernova hunting too. Kelper's unique capabilities captured the properties of the blast. This allowed astronomers to exclude a range of theories about how FELTs happen, and converge on a plausible model. They conclude that the brief flash is from a vast shell of material around a supernova that abruptly lights up when the supernova blast wave crashes into it.

Newswise — The universe is full of mysterious exploding phenomena that go boom in the dark. One particular type of ephemeral event, called a Fast-Evolving Luminous Transient (FELT), has bewildered astronomers for a decade because of its very brief duration.

Now, NASA’s Kepler Space Telescope — designed to go hunting for planets across our galaxy — has also been used to catch FELTs in the act and determine their nature. They appear to be a new kind of supernova that gets a brief turbo boost in brightness from its surroundings.

Kepler’s ability to precisely sample sudden changes in starlight has allowed astronomers to quickly arrive at this model for explaining FELTs, and rule out alternative explanations.

Researchers conclude that the source of the flash is from a star after it collapses to explode as a supernova. The big difference is that the star is cocooned inside one or more shells of gas and dust. When the tsunami of explosive energy from the blast slams into the shell, most of the kinetic energy is immediately converted to light. The burst of radiation lasts for only a few days — one-tenth the duration of a typical supernova explosion.

Over the past decade several FELTs have been discovered with timescales and luminosities not easily explained by traditional supernova models. And, only a few FELTs have been seen in sky surveys because they are so brief. Unlike Kepler, which collects data on a patch of sky every 30 minutes, most other telescopes look every few days. Therefore they often slip through undetected or with only one or two measurements, making understanding the physics of these explosions tricky.

In the absence of more data, there have been a variety of theories to explain FELTs: the afterglow of a gamma-ray burst, a supernova boosted by a magnetar (neutron star with a powerful magnetic field), or a failed Type Ia supernova.

Then along came Kepler with its precise, continuous measurements that allowed astronomers to record more details of the FELT event. “We collected an awesome light curve,” said Armin Rest of the Space Telescope Science Institute in Baltimore, Maryland. “We were able to constrain the mechanism and the properties of the blast. We could exclude alternate theories and arrive at the dense-shell model explanation. This is a new way for massive stars to die and distribute material back into space.

“With Kepler, we are now really able to connect the models with the data,” he continued. “Kepler just makes all the difference here. When I first saw the Kepler data, and realized how short this transient is, my jaw dropped. I said, ‘Oh wow!’”

"The fact that Kepler completely captured the rapid evolution really constrains the exotic ways in which stars die. The wealth of data allowed us to disentangle the physical properties of the phantom blast, such as how much material the star expelled at the end of its life and the hypersonic speed of the explosion. This is the first time that we can test FELT models to a high degree of accuracy and really connect theory to observations," said David Khatami of the University of California at Berkeley and Lawrence Berkeley National Laboratory.

This discovery is an unexpected spinoff of Kepler’s unique capability to sample changes in starlight continuously for several months. This capability is needed for Kepler to discover extrasolar planets that briefly pass in front of their host stars, temporarily dimming starlight by a small percent.

The Kepler observations indicate that the star ejected the shell less than a year before it went supernovae. This gives insight into the poorly understood death throes of stars — the FELTs apparently come from stars that undergo "near-death experiences” just before dying, belching out shells of matter in mini-eruptions before exploding entirely.

The science team's study appears in the March 26, 2018, online issue of Nature Astronomy.

Rest says the next steps will be to find more of these objects in the ongoing K2 mission, or in the next mission of that kind, TESS. This will allow astronomers to start a follow-up campaign spanning different wavelength regimes, which constrains the nature and physics of this new kind of explosion.

NASA's Ames Research Center at Moffett Field, California, manages the Kepler and K2 missions for NASA's Science Mission Directorate. NASA's Jet Propulsion Laboratory in Pasadena, California, managed Kepler mission development. Ball Aerospace and Technologies Corp. operates the flight system with support from the Laboratory for Atmospheric and Space Physics at the University of Colorado in Boulder, Colorado. The Space Telescope Science Institute (STScI) in Baltimore, Maryland, archives, hosts, and distributes Kepler science data. STScI is operated for NASA by the Association of Universities for Research in Astronomy, in Washington, D.C.

For images and more information about this study and Kepler, visit: