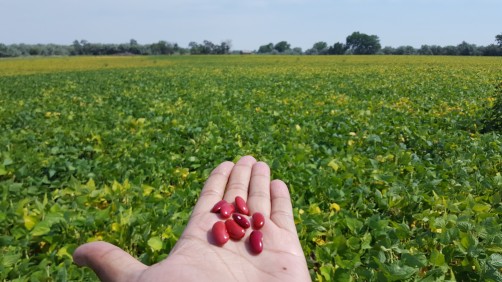 After the initial breeding, enough seeds must be produced to bring to market. This is the dark red kidney bean cultivar, ‘Talon,’ in a foundation seed production field near Kimberly, ID. 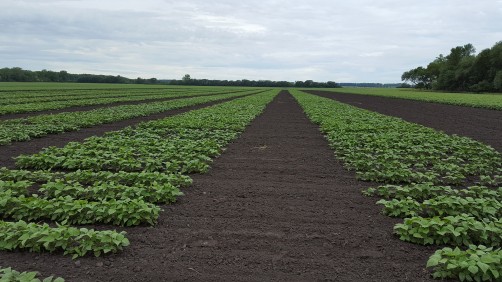 Breeders test new cultivars in dry bean breeding field trials like this one near Hatton, ND. 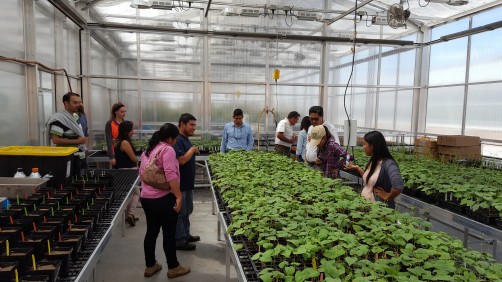 Newswise — July 19, 2017 - Kidney beans, like most other beans, are a nutritional powerhouse. They are packed with complex carbohydrates, protein, iron, and folate. They are also a good source of soluble fiber, which has several health benefits.

In 2014, farmers in the United States produced more than 86,700 metric tons of kidney beans. While other kinds of beans are farmed more, kidney beans command the highest market price by weight. Improvements to kidney beans, then, brings benefits to the farmer as well as the consumer.

Two new varieties of kidney beans – Talon and Rosie – have recently been released by a team of researchers led by Juan Osorno at North Dakota State University.

Improved resistance to root rot, which is caused by fungal pathogens, is especially important for kidney beans. “Their root systems are often weaker than other beans,” says Osorno. “They are more susceptible to root diseases. So anything we can do to improve these root systems is very helpful for farmers.”

Higher levels of resistance to root rot and bacterial diseases allow Talon and Rosie to allocate more nutrients to growth and seeds. That leads to higher yields compared to other varieties, often by hundreds of kilograms per hectare.

Higher yields are important for food security. “We always want to produce more food on the same piece of land,” says Osorno. “Talon and Rosie will help farmers do that.”

Osorno and his colleagues tested how Rosie and Talon performed in 24 different field testing sites across Minnesota and North Dakota. Minnesota is the leader in kidney bean production in the U.S. “If you buy a can of kidney beans produced in the U.S., chances are about 50-50 the beans are from Minnesota,” says Osorno.

While they are both kidney beans, Talon and Rosie belong to different market classes. Talon is a dark red kidney bean, which are the most extensively cultivated sub-class of kidney bean in the U.S. Rosie is a light red kidney bean – the second most important sub-class.

“It’s important that we develop new varieties of kidney beans, irrespective of market class,” says Osorno. Kidney beans have less genetic diversity than other beans. That makes them more vulnerable to a single pathogen or disease.

Part of the challenge is matching consumer expectations. “When consumers think of kidney beans – or any kind of beans – they already have something in mind,” says Osorno. New varieties have to look and taste like consumers expect. “If the consumer doesn’t like them, other traits like higher yields won’t be useful,” says Osorno.

Most efforts to develop new varieties of beans are publicly funded, according to Osorno, because of their importance as a source of protein. “Beans are a vital part of food security across the world, especially in many developing countries,” he says.

Osorno has made Rosie and Talon seeds available for research purposes. “As a breeder, I am always looking for new varieties to cross,” he says. “Plant breeding can be a bit like rolling dice – you never know quite what to expect. The more plants you breed, the greater the chances of generating a useful variety.”

It’s also important to protect the existing varieties. Seeds of Talon and Rosie have been deposited for safekeeping with USDA Agricultural Research Service’s National Laboratory for Genetic Resources Preservation. “Dry beans, including kidney beans, are a relatively smaller crop,” he says. “There aren’t many commercial breeding programs.”

Dried beans are part of a food group known as pulses. The United Nations Food and Agriculture Organization declared 2016 the International Year of Pulses (IYP). In celebration, the Crop Science Society of America (CSSA) created a web page for the public about pulses, www.crops.org/iyp. Special tabs for the public include K-12 Education, Beans in the News, Grow Your Own, and Delicious Ideas.