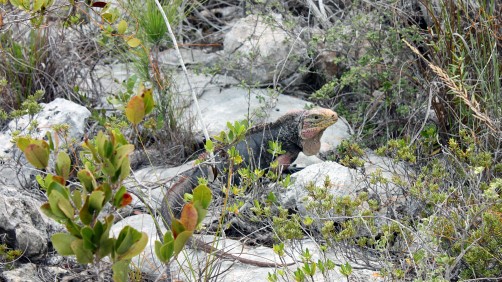 North Carolina State University research comparing mainland and island children's wildlife preferences found that kids in the Bahamas chose a wider variety of species as their favorites, including birds, fish, insects and lizards such as this iguana. North Carolina kids preferred mammals.

Growing up on an island or mainland location can shape the way children think about wildlife, including which species they prefer, according to North Carolina State University research. Comparison surveys of children living in the Bahamas and in North Carolina reveal significant differences and potential challenges for wildlife-conservation efforts on islands.

It’s important to understand the next generation’s priorities for wildlife conservation, says lead author Hannah Shapiro, an undergraduate student who surveyed students from Andros, an island in the Bahamas, and compared the results with those of children in North Carolina for a study published in Environmental Conservation.

“Children on Andros showed a preference for feral cats, dogs and pigs, which are invasive species that can be more damaging in an island environment,” Shapiro says. “That’s a concern for future wildlife-conservation efforts.”

However, island children chose a wider variety of wildlife species as their favorites – including birds, lizards, fish and insects – than their continental counterparts from North Carolina, who strongly preferred mammals, including deer, bears, rabbits, wolves and squirrels.

Island children may have a greater preference for species like rock iguanas, conchs and flamingos (the national bird of the Bahamas) not only for reasons of familiarity and national pride but also because they’re surrounded by fewer big furry species, known as “charismatic megafauna” to wildlife biologists.

About a third of the children from Andros who were surveyed take part in Discovery Club, a Bahamian environmental education program. Discovery Club participants showed a greater concern for native species with declining populations than nonmembers.

“The Discovery Club curriculum deals specifically with declining species but it doesn’t focus heavily on invasive species,” says co-author Kathryn Stevenson, an NC State assistant professor and former public school science teacher who studies environmental literacy. “Discovery Club offers an ongoing way to build awareness of wildlife issues. Based on the findings, a recommendation would be to add a specific module on invasive species to help children learn about the impact on native wildlife.”

Wildlife biologists need to understand the human factors that drive conservation decisions, says co-author Nils Peterson, an associate professor in NC State’s College of Natural Resources who studies the intersections of human and natural systems. “Faced with a constant loss of species and limited resources, conservation biologists are always in triage mode, identifying the species most at risk and targeting our efforts to save them,” Peterson says. “The better understanding the public has, the more likely we are to base our priorities on sound science.”

The article, which is part of an Environmental Conservation themed edition about human and island environments, is based on undergraduate research done in a conservation biology study-abroad course. Brian Langerhans, an NC State faculty member in biological sciences, and Kristin Frew, a former graduate student, contributed to the study.

Note: An abstract of the paper follows.

Abstract: Efforts to prioritize wildlife for conservation benefit from an understanding of public preferences for particular species, yet no studies have integrated species preferences with key attributes of the conservation landscape such as whether species occur on islands (where invasive exotics are the primary extinction threat) or continents (where land use change is the primary extinction threat). In this paper, we compare wildlife species preferences among children from a continental location (North Carolina, USA, n=433) and an island location (Andros Island, The Bahamas, n=197). Children on the island preferred feral domesticated species and different types of taxa than mainland children, perhaps due to the strongly divergent species richness between the regions (e.g. island children showed greater preferences for invertebrates, lizard sand aquatic species). Boys preferred fish, birds and lizards more than girls, whereas girls preferred mammals. The fact that island children showed strong preferences for invasive species suggests challenges for conservation efforts on islands, where controlling invasive exotic species is often of paramount importance but can conflict with cultural preferences for these same species.