Kinesio Tape Sticking as a Treatment for Athletes and Others 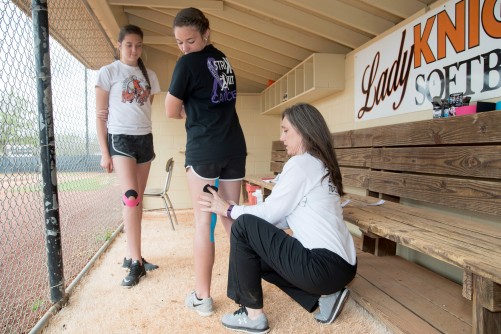 Newswise — WINSTON-SALEM, N.C. – May 16, 2017 – Sisters Tyler and Riley Lingerfelt both play volleyball and softball at North Davidson High School in Lexington. In the past year, both incurred minor injuries and both were treated with the same therapy: kinesio tape, the colorful, stretchy strips that have become familiar sights on the bodies of professional, varsity and weekend athletes.

Nunn, herself a former volleyball and softball player at North Davidson High, applied two short pieces of tape just above and just below Riley’s kneecap. The top strip, Nunn explained, was a “mechanical” correction to keep the kneecap from riding too high while the lower piece compressed a tendon to take pressure off the knee.

The treatment worked, easing Riley’s pain and allowing her to keep playing sports.

“I didn’t think it would do anything, but after I started using it, I felt a huge difference,” said Riley, a freshman at North Davidson.

Kinesio taping had previously helped Riley’s older sister. Tyler was treated last spring after she strained a hamstring while running to first base during a softball game. Nunn applied a strip of the tape to Tyler’s hamstring to support the muscle and two short pieces in an X pattern over the area where she felt the most pain to compress the muscle. The taping kept Tyler, now a 17-year-old junior, on the field.

“Kinesio tape cues your muscles to act, or, if your muscles are overreacting, it can cue them to calm down,” Nunn said. “I’ve had patients tell me, ‘It sounds like voodoo.’ I tell them, ‘It is voodoo, but just trust me.’”

Kinesio tape first gained widespread public attention when it was spotted on athletes – notably U.S. women’s beach volleyball player Kerri Walsh – during the 2008 Beijing Olympics. But it has been around since the 1970s, when it was developed by Kenzo Kase, a Japanese chiropractor and acupuncturist.

Named after kinesiology, the scientific study of the mechanics of body movements, the extremely thin kinesio tape is made of cotton with elastic polymer strands woven in. The elasticity in the tape gently lifts the skin and attached tissue, permitting blood and lymphatic fluids to flow under the skin surface around a targeted muscle to promote healing without restricting the full range of motion. Kinesio tape is commonly applied in X or Y patterns to produce multiple effects.

The tape is latex-free and breathable, repels water and can be worn for up to five days without being removed. Sold under numerous brand names, it is available in different widths, pre-cut shapes for specific parts of the body (knee, shoulder, etc.) and a variety of colors and patterns.

“Kinesio taping is a good option because it is cheap, easy to apply and can be tailored specifically to match a patient’s anatomy and pathology,” said John Hubbard, M.D., an orthopaedic surgeon at Wake Forest Baptist Medical Center who specializes in sports medicine. “I use kinesio taping for shoulder instability and kneecap problems, and it can also be used for tendonitis, muscle complaints and instead of or in conjunction with bracing.”

But the tape’s use isn’t limited to sports injuries.

Evan Beckman, a physical therapist at Wake Forest Baptist, says kinesio taping can “quiet” muscles that are in spasm or stimulate muscles that are weak. He says the tape also is employed after knee and shoulder surgery to control swelling and promote muscle function.

The effectiveness of kinesio tape as a treatment has not been definitively proven in clinical studies; the results of such research to date have been mixed, at best. But the tape has not produced any negative effects and there’s plenty of anecdotal evidence that it generates positive results – even if those results are only in the minds of those who’ve been taped.

Nunn said that in the 11 years she has been practicing kinesio taping she has become accustomed to hearing a common comment from once-skeptical patients: “I don’t know what that did, but something is different. Let’s do it again.”