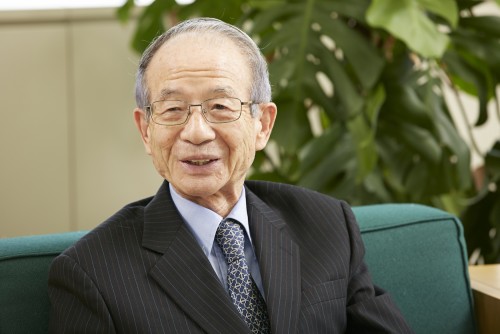 Newswise — BERKELEY, Calif. – July 17, 2017 – Dr. Ikujiro Nonaka, one of the world’s top academic management scholars, will receive the Lifetime Achievement Award from the Haas School of Business at the University of California, Berkeley, on November 3, 2017, during the school’s annual gala. Dr. Nonaka has been a pioneer in creating the field of knowledge management and studying the impact of knowledge creation on product development and innovation.

Berkeley-Haas Dean Rich Lyons applauded Nonaka’s lasting impact on the business world. “Nonaka has transformed how people drive innovation together,” said Lyons. “Applying a humanistic lens and practical wisdom to his research, he has developed new frameworks for how organizations can transcend simply managing data to using the knowledge within their organizations to create better outcomes. We are proud to call him an alumnus and even more honored to celebrate him with this much-deserved award.”

“No one has done more to shape knowledge management than Ikujiro Nonaka, and he is one of Berkeley’s most esteemed alumni in Asia,” said UC Berkeley Chancellor Carol Christ. “He has remained a loyal and passionate supporter of the University and the free exchange of ideas by hosting faculty and students in Japan as well as by arranging access to data and research contacts. He is a national treasure in Japan, but the impact of his insight and wisdom has been deeply felt at Berkeley and beyond.”

Nonaka, 82, a professor emeritus at the Graduate School of International Corporate Strategy at Hitotsubashi University, worked for many years at Fuji Electric in Japan, where he created the company’s first management development program. He came to Berkeley in 1967, earning an MBA in 1968 and a PhD in business administration in 1972. At Berkeley, he also studied sociology, which heavily influenced his theories on business throughout his career.

“Dr. Jiro Nonaka has contributed enormously to the theory and practice of innovation management and has deepened our understanding of knowledge creation in large organizations,” said David Teece, the Thomas W. Tusher Professor in Global Business and faculty director of the Tusher Center for The Management of Intellectual Capital at Berkeley-Haas. “Dr. Nonaka is well known to leading executives in Asia, Europe, and North America. He has helped businesses learn and transform, just as he himself has learned and transformed over his long and successful career. The global recognition he has received is quite remarkable and is a wonderful tribute to his graduate education at Berkeley-Haas.”

Along with his longtime collaborator, Harvard Business School Professor Hirotaka Takeuchi, MBA 71, Ph.D. 77, whom he met at Berkeley-Haas, Nonaka argued that knowledge creation within companies is a source of competitive advantage. The two introduced the concept in an influential article, “The Knowledge-Creating Company,” published in Harvard Business Review in 1991. Their subsequent book, The Knowledge-Creating Company: How Japanese Companies Create the Dynamics of Innovation (Oxford University Press, 1995), won the Association of American Publishers’ Best Book of the Year Award in business and management and has proved important in advancing the field of management.

In 2009, the Economist’s “Guide to Management Ideas and Gurus” credited Nonaka as one of three such “gurus” who “connected Japanese industry and management with that of the rest of the world.” In 2011, Nonaka and Takeuchi’s article, “The Wise Leader,” published in Harvard Business Review, argued that the best executives strive for the common good. In 2013, Nonaka won the Thinkers50 Lifetime Achievement Award and was inducted into the Thinkers50 Hall of Fame.

In Japan, Nonaka has earned a Purple Medal of Honor from the government for his contribution to academia and delivered an Imperial New Year’s Lecture by invite of the Emperor of Japan, the first-ever Japanese professor in the field of business administration and management to be asked to do so.

Nonaka is perhaps best known for his creation of the Socialization-Externalization-Combination-Internalization (SECI) model to explain how firms can best generate knowledge and understanding and bring new products to market. The model rejects the linear model of idea creation in favor of Nonaka’s SECI spiral, which describes a ceaseless flow of cyclical interaction between tacit and explicit knowledge among groups and individuals. The model can facilitate the development of innovative products.

Another of Nonaka’s contributions to the field of management was the recognition of the key role middle managers can play in knowledge creation within a company. During downsizing in the 1990s, when many U.S. firms were laying off middle managers to save costs, Nonaka argued they could be a vital bridge in translating the vision of upper management into execution by frontline staff.

In 1997, Nonaka became the Haas School’s first Xerox Distinguished Professor in Knowledge, the first professorship in the nation dedicated to the study of knowledge and its impact on business. He has remained a passionate champion of Berkeley, which he has called “the Athens of the Pacific” and has continued to support the school with visits, academic exchanges, and participation in co-hosting conferences.

The school’s highest honor, the Berkeley-Haas Lifetime Achievement Award is reserved for exceptional leaders who have made a significant impact through their professional accomplishments and who embody the Defining Principles of Berkeley-Haas: Question the Status Quo, Confidence Without Attitude, Students Always, and Beyond Yourself. The award has only been given four times before, to financier and philanthropist Warren Hellman; Blum Capital Partners Chairman Richard Blum; World Bank President Tom Clausen; and Levi Strauss CEO Peter Haas. Nonaka is the first academic professor to receive the award.

Berkeley-Haas’ Institute for Business Innovation and the Tusher Center for the Management of Intellectual Capital will follow up the November celebration by hosting a Festschrift in Nonaka's name on campus in 2018.