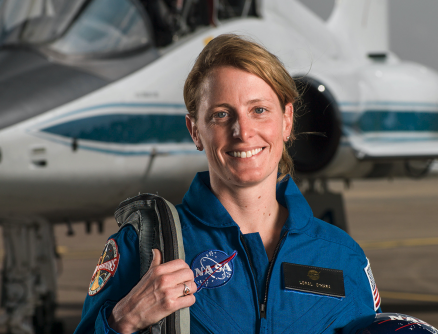 Brand-new astronaut Loral O'Hara attended the University of Kansas from 2001-2005. 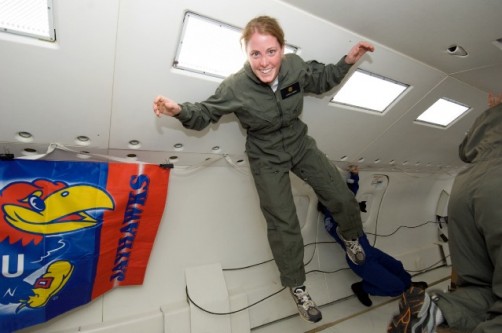 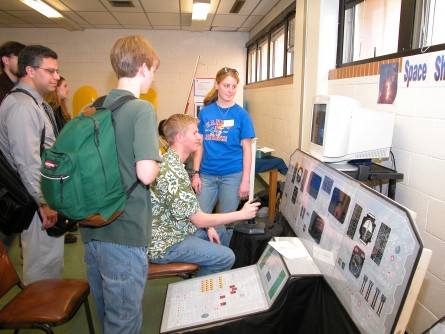 O'Hara as a KU student participated in the Engineering School's Engineering Expo. “We built a Space Shuttle simulator one year — a whole mock-up of the inside of a shuttle for kids to try landing the shuttle," she said. 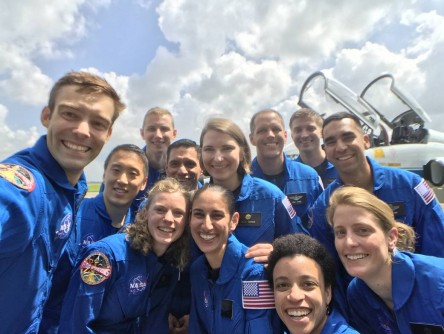 O'Hara (bottom right) in the class selfie of the 2017 Astronaut Candidate Class.

Newswise — LAWRENCE — When she was a kid growing up in Sugarland, Texas, Loral O’Hara’s second-grade class tracked the growth of tomato seeds flown aboard the Space Shuttle to compare them to tomatoes cultivated on Earth. After more contact with NASA during class field trips to the Johnson Space Center, O’Hara set her sights on someday becoming an astronaut.

“Being exposed to that world, it captured my imagination,” O’Hara said. “I loved things that fly —  birds, planes and rockets — and the whole idea of space exploration. Plus, I grew up in a pretty ‘sciencey’ family. My dad was a geologist, and my mom was a chemistry major. A lot of my childhood was spent going to the mountains in Colorado and looking at rocks.”

O’Hara determined every step she took in life would be on a path toward her goal of becoming an astronaut. In June, she achieved her long-held dream: NASA announced O’Hara was one of 12 members of the 2017 Astronaut Candidate Class selected from more than 18,300 applicants.

A key step of O’Hara’s journey to becoming a NASA astronaut was to attend the University of Kansas, where she studied aerospace engineering as an undergraduate student from 2001 until graduating in 2005.

“I chose KU initially because I got an academic scholarship and was invited to come up and check it out,” she said. “I got an excellent tour of the aerospace engineering department and its test facilities. It was a little smaller than other departments I was looking at and offered very hands-on research opportunities. Also, I fell in love with Lawrence.”

As a KU freshman in 2001, O’Hara lived on the 8th Floor of McCollum Hall, then in Templin Hall during her sophomore year. As an upperclassman, she lived off campus near the Triangle fraternity and on Indiana Street.

For O’Hara, academics were the top priority.

“I always loved the Engineering Expo in the Engineering School,” she said. “We built a Space Shuttle simulator one year — a whole mock-up of the inside of a shuttle for kids to try landing the shuttle. I was a part of all the aerospace organizations, like AIAA, AAS, Jayhawk Rocket Design and the KU Microgravity Team.”

In the classroom, O’Hara cited KU aerospace engineering professors Saeed Farokhi and Rick Hale as being primary mentors. In turn, she left a lasting impression on KU faculty.

“Loral gave back to our local community by sharing her NASA experiences with current and potential students, seeking to inspire the next generation of aerospace engineers,” Hale said. “She was absolutely instrumental in a successful NASA Reduced Gravity Student Flight Opportunities program, which was the first for the University of Kansas and one of the first in the State of Kansas — two successful teams flew in the same year. Loral was responsible for developing the proposal, managing the team and leading the outreach activities.”

While focused on coursework and extracurricular activities, O’Hara also found time to make many Jayhawk memories. For example, O’Hara said that rowing with KU Crew was “a huge part of my life.”

“I spent a lot of time down at Burcham Park on the (Kansas) River,” she said. “It’s a really special place for me. I love Lawrence, especially walking downtown to Mass Street. I come back every chance I get.”

Reflecting on her KU experience, O’Hara said, “I definitely think I changed. I grew up a lot, like most people starting out as a freshman and making their way through school handling a course load, extracurricular activities, and meeting some of my best friends — people I’m still friends with to this day.”

Following graduation from KU in 2005, O’Hara earned a Master of Science degree in Aeronautics and Astronautics from Purdue University. Since then, she’s worked as a project engineer at Rocketplane Limited, as a design engineer at Stone Aerospace, and most recently as a research engineer at Woods Hole Oceanographic Institution, where she works on subsea systems development. Along the way, O’Hara has earned a private pilot’s license and certifications as a research diver and EMT/wilderness first responder.

“I’m pleased that another KU grad has been chosen to be part of NASA’s astronaut program,” Hawley said. “I was privileged to serve on the Astronaut Selection Board for 16 years during my NASA career, and the quality of our applicants was always very impressive. For Loral to be selected is evidence of her outstanding technical qualifications as well as skills in other things we evaluated, such as leadership and teamwork skills, operational aptitude, and the ability to learn. I'm sure she’ll be a fine representative of KU and our nation’s space program.”

O’Hara’s next step comes in August when she’ll report to NASA in Houston for two years of training. She’ll learn to spacewalk, fly a T-38 jet, operate robotics and space systems and develop Russian language skills.

“We pretty much have to be able to do everything,” she said. “That’s one of the exciting parts of longer-duration missions — you really have to be a master of all trades. In the past, with the Space Shuttle they could send up experts in just one field because missions were shorter and the teams were larger. But with the International Space Station and longer missions you have to be very broad in your expertise.”

Eventually, O’Hara could be assigned to missions aboard the ISS, or one of the commercial crew program vehicles developed by Space X and Boeing, or NASA’s own Orion project focused on deep-space exploration.

“Every time I look at the moon, I think, ‘Holy cow, I might be walking around up there someday — that’s actually a real possibility,” she said.

Asked what advice O’Hara would offer current KU students looking to achieve their own goals, she said: “always be open to trying new things.”

“You never know what experience might connect you to some other opportunity or experience you didn’t know existed,” she said. “Keep an open mind and stay curious. You kind of look back and can connect dots, but it wasn’t always clear where the path would lead — I just took the most exciting opportunity at the time and it’s worked out pretty well I think.”