5-Feb-2011 6:00 AM EST, by University of Alabama Huntsville
favorite_border 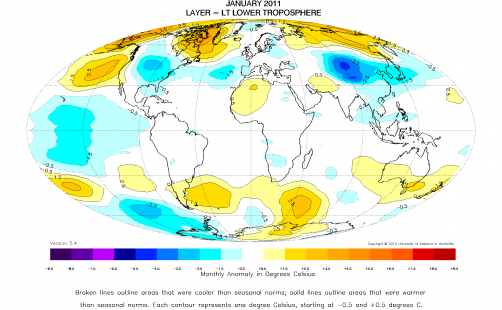 The La Nina Pacific Ocean cooling event continues to pull down temperatures, with the global average temperature falling below seasonal norms for the first time in 18 months and only the second time in almost two and a half years, according to Dr. John Christy, professor of atmospheric science and director of the Earth System Science Center at The University of Alabama in Huntsville.

Technical Note:The baseline period used to determine seasonal norms has been changed from the 20-year (1979 to 1998) period at the beginning of the satellite record to a new 30-year (1981 to 2010) reference average. This was done to match the climatological period normally used with climate data by the U.N.'s World Meteorological Organization.

* * *As part of an ongoing joint project between UAHuntsville, NOAA and NASA, Christy and Dr. Roy Spencer, a principal research scientist in the ESSC, use data gathered by advanced microwave sounding units on NOAA and NASA satellites to get accurate temperature readings for almost all regions of the Earth. This includes remote desert, ocean and rain forest areas where reliable climate data are not otherwise available. 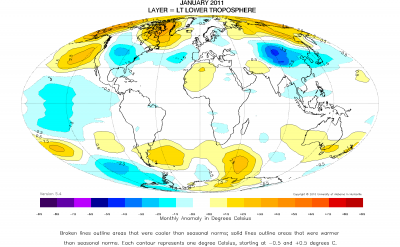