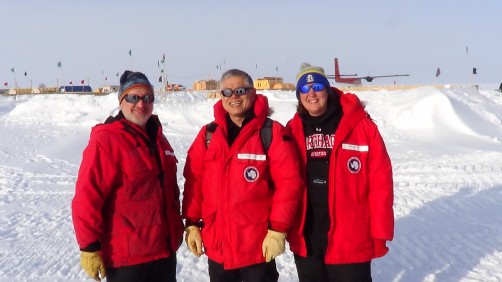 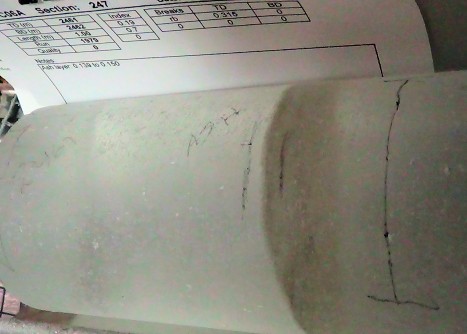 Each section of ice core retrieved is carefully labeled. 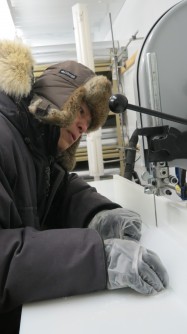 Using a special band saw, Cole-Dai slices off a piece of ice core from Western Antarctica. The specimens are stored at -4 degrees Fahrenheit in the SDSU Ice Core and Environmental Chemistry Lab freezer. 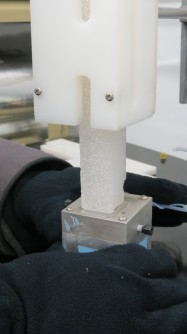 The piece of West Antarctica ice core is positioned on a device developed by the SDSU ice core team which captures only the inner section as it melts and then sends the meltwater directly to the analysis machines in the adjoining lab.

Newswise — Analyzing the kinds and quantities of chemicals trapped in accumulating polar snow can help scientists identify and study global climate change. Figuring out the age of ice layers is a critical part of any ice core research, according to South Dakota State University chemistry professor Jihong Cole-Dai. He leads the SDSU Ice Core and Environmental Chemistry Lab, which specializes in measuring trace chemicals in polar ice cores—including sections of brittle ice. The lab has developed a unique instrument to perform automated, fast chemical analysis.

Through National Science Foundation funding, the lab has worked on ice cores from Greenland and Antarctica. Most recently, the researchers were part of the 2006-2013 West Antarctica Ice Sheet (WAIS) Divide Ice Core project, which involved more than 20 universities and national laboratories.

Measuring trace chemicals through brittle iceResearchers use variation patterns of trace chemicals to date the ice. Chemical analysis on thousands of ice samples generates data revealing the yearly layers in the core, Cole-Dai explained. “We created a map like a tree stump where you can see the rings and figure out how old the tree is at any stage of growth.” Accurate dating requires chemical analysis of the entire length of an ice core, up to several thousand meters, including the section known as brittle ice. The ice in the middle portion of the long core is brittle to the touch because of the pressurized air bubbles trapped in the ice.

For the West Antarctica project, the SDSU team analyzed more than half-mile ice core. They cut the core into samples the size of ice cubes, Cole-Dai explained. “That translates to thousands and thousands of samples.”

The half-mile core included the brittle ice section. “It had many fractures and could fall to pieces when sampled in lab,” Cole-Dai explained. “It was the most challenging part in terms of analysis.”

Their work on the fragile section was critical to accurately dating the entire ice core. “Our analysis of the brittle ice helped determine the age of each ice layer in the WAIS Divide ice core,” he noted. “We made it possible to look back 70,000 years without leaving a gap.”

The team used the specialized instrument to analyze the ice core in less than three years. If done manually, the analysis would take 10 years or more. “That’s a big improvement,” Cole-Dai said. “Our lab is the first one in the world to do detailed chemical analysis through the brittle part of an ice core.” Unraveling historyDetermining the precise age of the ice layers helped scientists in the WAIS Divide project discover that global climate change begins in the Artic and moves southward. They compared the West Antarctica ice core results to those from an ice core from Greenland in the Arctic and showed that, when the Earth’s climate was oscillating between warm and cold in the last ice age, warming began in the North Atlantic and spread southward over the next 200 years. The SDSU team’s expertise with ice core chemical analysis has led to another collaborative project that began last year. “We’re analyzing a 1500-meter ice core from the South Pole,” he explained.

That will give Cole-Dai and his team more opportunities to uncover clues about climate change recorded in ice cores. “By studying these things in the past in a very detailed, systemic way, we can better understand how climate change takes place and to try to forecast future climate change,” he concluded.