Lack of Compatibility in Admixtures Could Harm Concrete Durability 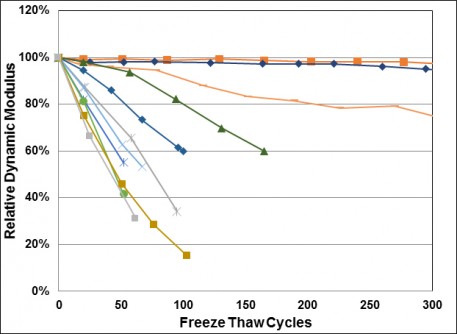 Fig. 1—Relative dynamic modulus of elasticity versus freeze-thaw cycles for mixtures containing an air-entraining agent and different quantities of a shrinkage reducing admixture

Compatibility of Shrinkage-Reducing and Air-Entraining Admixtures

Newswise — Concrete, the most widely used manufactured construction material in the world, is made up of three basic components: portland cement, water, and fine and coarse aggregates (rock, sand, or gravel). Also, small quantities of additives, commonly known as admixtures, are added to concrete to improve its properties. However, to ensure that these admixtures interact effectively, it is essential they be tested for compatibility.

Admixtures have a history dating almost as far back as concrete’s. In ancient Rome, milk, fat, and blood from animals were added to concrete, most likely to make it more workable, with the additional benefit of improving its durability, particularly its resistance to freezing and thawing. As in Roman times, today’s concrete is susceptible to damage caused by cycles of freezing and thawing, especially when saturated or nearly saturated with water; therefore, most concrete leaving a ready-mix plant has an admixture added to it.

One of the most widely used admixture types is the air-entraining agent (AEA), which increases the air content of concrete and, like the milk, fat, and blood in the Roman concrete, increases its resistance to freezing and thawing. A satisfactory air-void system in concrete is one made up of many small air bubbles that are evenly spaced throughout the portion of the concrete that is made up of cement and water.  This is known as “cement paste.”

Another, newer concrete additive is the shrinkage-reducing admixture (SRA), which reduces the drying shrinkage. Drying shrinkage is the long-term contraction that takes place as concrete loses moisture. Drying shrinkage is the principal cause for cracking in concrete.  In many cases, drying shrinkage not only affects appearance, but also impairs the longevity of some structure types, such as bridge decks, by providing easy access for aggressive substances, such as deicing salts.  These substances cause durability problems in the concrete, as well as corrosion of reinforcing steel. In recent years, adding SRAs have become an increasingly popular method to reduce cracking in concrete.

Shrinkage-reducing admixtures function by reducing the surface tension of water in the pores within concrete, thus reducing the stresses that cause shrinkage. Meanwhile, most AEAs function in the same way by reducing the surface tension of the mixing water to promote the formation of air bubbles, much in the same way as dishwashing detergents (surfactants) cause bubbles to form in water. When a surfactant AEA is used in conjunction with an SRA, the surface tension of the water can be excessively lowered, resulting in larger air voids and wider spacing between the air voids for the same total air content. The wider spacing between air voids reduces the freezing and thawing resistance of concrete. A newer type of AEA that is foaming polymer-based, is produced using specialized aeration equipment that is then dispersed throughout the concrete. In theory, the polymer-based foam produces an air-void system that is less sensitive to the effects of SRAs than that produced by surfactant-based AEAs.

To study what influence the interaction between SRA and AEA have on concrete, 24 batches of concrete containing a surfactant-based or foaming polymer-based AEA, in conjunction with one of two SRAs, were compared for their frost resistance, which was identified by their performance in freezing and thawing and salt scaling tests. In freezing and thawing tests specimens are frozen and thawed, and the dynamic modulus of elasticity of specimens is measured to determine their level of degradation (Fig. 1). In the salt scaling test a salt solution is ponded on top of each specimen, and the specimens subjected to freezing and thawing cycles. The loss of material due to concrete particles scaling off the top surface was measured to evaluate the scaling resistance of the mixture.

The air-void systems of the specimens were evaluated to explore the reasons for the differences in performance. Specimens were polished and the total air volume and diameters and distances between air voids measured. Results showed that both the surfactant-based and polymer-based AEA mixtures containing an SRA experienced greater losses in air content from the plastic to the hardened concrete than those without an SRA, with losses increasing as the SRA dosage increased. A higher dosage of SRA also increased the distance between air voids, further decreasing the frost resistance of concrete mixtures. Perhaps most importantly, the spacing between air voids was greater for the polymer-based AEA mixtures than for the surfactant-based AEA mixtures, explaining the difference in performance.

Results confirm that testing should be performed using multiple admixtures in concrete to verify the admixtures are compatible and that the performance of the final concrete is as expected.

The research can be found in a paper titled “Compatibility of Shrinkage-Reducing and Air-Entraining Admixtures,” published by ACI Materials Journal.